Are you looking for 6  Days Egypt itinerary ? with our 6 Day Egypt tour Package, You will visit the highlights of Egypt like the Pyramids of Giza, The Sphinx, Visit Alexandria the ancient city of Cleopatra, fly to Aswan to visit Abu Simbel, Phiala temple and the high Dam then take the train to Luxor to visit, the valley of the kings,
Bekijk route op de kaart

Upon your arrival,Marsa Alam tours representative will meet & assist you at Cairo International Airport, Transfer to the hotel by private air-conditioned vehicle
Free evening overnight in the  5* Hotel in Cairo.Depends on your arrival. If your flight arrives, If you have an early flight to Cairo you can contact us to make a tour suggestion

The great pyramid was built as a tomb for the Fourth Dynasty Egyptian pharaoh Khufu and estimated that it was built in the 26th century BC during a period of around 27 years.
Initially standing at 146.5 meters (481 feet), the Great Pyramid was the tallest man-made structure in the world for more than 3,800 years. Throughout history, the majority of the smooth white limestone casing was removed, which lowered the pyramid's height to the present 138.5 meters. What is seen today is the underlying core structure. The base was measured to be about 230.3 meters (755.6 ft) square, giving a volume of roughly 2.6 million cubic meters (92 million cubic feet), which includes an internal hillock
If you wish to visit the burial chamber of King Cheops. You can ask the tour guide to buy it for you it costs 440 l. E per person( 25 $ per person)

Then we will visit the Pyramid of Mykerinus.

We go head to visit the Valley Temple of king Chephren. While doing that you can have a closer look at the Great Sphinx - the legendary guardian that stands by the huge funeral complex with its lion body and the head of king Chephren. Enjoy a camel ride by the Pyramids of Giza in the desert.  After that You will go to a local restaurant to have your lunch before you visit the  Museum then you will visit the Egyptian Museum in El Tahrir 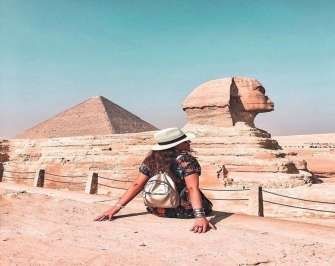 ► The Egyptian Museum
It exhibits a rare collection of over 250,000 genuine artifacts that date as far back as 5000 years, including an exclusive exhibit dedicated to Tutankhamen - A collection of treasures, gold, and jewelry that were buried in his tomb for over 3,500 years before they were discovered in 1920 when his tomb was excavated.
after visiting the Museum you will go to Cairo airport to fly to Aswan overnight in Basama hotel

Early Visit to Abu Simbel from Aswan
► Abu Simbel temples:
The two temples of Ramses the second and the Queen Nefertari were carved out of the Mountain on the west bank of the Nile between 1274 and 1244 B.c, The Great Temple was dedicated to Ramses the second, Ra-Harakhty, Amun Ra, and Ptah, with 4 Colossal statues, The second temple was dedicated to The Queen Nefertari and Goddess Hathor, the two temples were dismantled stone by stone and rebuilt on higher ground, The preservation of the two temples of Abu Simbel must Rank as the greatest Achievement of the Unesco.
Lunch in Aswan
Today you will visit Aswan attractions, including the Temple of Philae, and tour by Felucca around Elephantine, the High Dam, the Unfinished Obelisk
► Phiala temple:
Built to honor the goddess Isis, this was the last temple built in the classical Egyptian style. Construction began around 690 BC, and it was one of the last outposts where the goddess was worshipped.
► The high dam:
Aswan High Dam is a rock-fill dam located at the northern border between Egypt and Sudan. The dam is fed by the River Nile and the reservoir forms Lake Nasser. Construction for the project began in 1960 and was completed in 1968. It was officially inaugurated in 1971.
►The Unfinished Obelisk :
Aswan was the source of ancient Egypt’s finest granite, used to make statues and embellish temples, pyramids, and obelisks. The large unfinished obelisk in the Northern Quarries has provided valuable insight into how these monuments were created, although the full construction process is still not entirely clear. Three sides of the shaft, nearly 42m long, were completed except for the inscriptions. At 1168 tonnes, the completed obelisk would have been the single heaviest piece of stone the Egyptians ever fashioned.
at 16:00 sailing trip with Felucca around Elphinatine island and Visit Lord Kitchener island- Then Optional trip to visit  the Nubian village
The Nubian village is one of Aswan's attractions. It's worth visiting and spending  2 hours. The place is very authentic and genuine, Colorful and artistic, the Nubian Village will surprise you in every corner! While walking in the village, you will straight away feel the soul of this place!
Dinner &overnight on board the Cruise
Take the First-class train to Luxor- Transfer to the hotel- Nile Palace Steigenberger

► The Valley of the Kings:
Once  called the great Place of the Truth, this valley is Called now the valley of the Kings, It is a Majestic domain of the Pharaohs who once lay in great stone Sarcophagi, awaiting immortality, The isolated valley behind Deir el Bahri is dominated by the Pyramid-Shaped Mountain Peak
► The Queen Hatshepsut temple :
Rising out of the desert Plain, in a series of terraces, The temple of Hatshepsut Mergs with sheer limestone cliffs on the eastern face of the Theban Mountain as if Nature herself had built this Extraordinary monument.
► The colossi of Memnon:
Massive  pair statues Known as the  Colossi of Memnon, Rising about 18 M from the plain, are the remains of what was once the largest  complex on the west bank, Built by Amenhotep the Third
►  Karnak Temple   :
Karnak   is more than A temple, is a spectacular Complex of Sanctuaries, Kiosks, Pylons, and Obelisks, All dedicated to the Theban gods and to the Greater Glory of Egypt`s Pharaohs, Karnak  was the Most Important place for the worship of the Theban Triad(Amun, Mut, and Khonso)
Lunch will be served during the trip
Overnight in Luxor 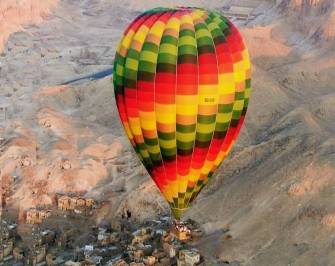 Pick-up time from Cairo Airport. Start your Private tour to Alexandria From Cairo, starts at 7:00 am with a Pickup by our Egyptologist, and transfer by Private A/C Vehicle to Alexandria, The distance is 220 k/m Northwest of Cairo. Arrive at   Alexandria around 10 am
►  The Catacombs Kom el Shoqafa
Start your day Tour in Alexandria by Visiting The Roman  Catacombs of Kom el Shoqafa
The Catacombs Kom el Shoqafa
Archaeologists believe that the Catacomb of Kom el Shoqafa was started in the 2nd century A.D. and was used to intern the dead for the next 200 years. This was a period in the history of the city of Alexandria when there was a great mixture of different cultures. Of course, there was the ancient history of the great Egyptian kingdoms which went back thousands of years
►  Pompey Pillar
Has nothing to do with Pompey. The story behind the name refers to the possible burial ground of the Roman general when he fled to Egypt and was assassinated after losing a major battle in Greece against Caesar. The red granite column was probably built to honor Emperor Diocletian. Today it stands 25 meters high and is the tallest ancient monument in Alexandria
►  The Citadel of Sultan Qeitbay
The Citadel was built in the 15th Century by the Mamlouk Sultan Qeitbay, To Guard the City against the threat of Crusaders, This wonderful Islamic Monument was built by the use of the ruins of the old Lighthouse that was constructed by Ptolemy 11 in the 3rd Century B.c. The Lighthouse was damaged during an Earthquake that Occurred in Egypt in 1303 A.c during the reign of the Mamlouk King  Qeitbay
lunch in Alexandria
Lunch in Alexandria in Egyptian Restaurant, Fish Market
►  The new Library of Alexandria
The Library of Alexandria was reborn in October 2002 to reclaim the mantle of its ancient namesake. It is not just an extraordinarily beautiful building; it is also a vast complex where the arts, history, philosophy, and science come together. Moreover, the myriad activities it offers have made it a place for open discussion, dialogue, and understanding.
Then back to Cairo.Overnight in Cairo

After having your breakfast, you will be transferred to Cairo airport for your departure or extend your day to visit old cairo if you have late flight

► Know Before You go

Reservations should be made as early as possible to book the desired Nile cruise, spaces will be secured upon receiving a deposit of 25 %, and during the Christmas and New Year holidays, the required deposit is 50%. This deposit forms part of your final payment. Deposits can only be made by credit cards, wire transfers and or the Western Union

►Payment Policy
Reservations should be made as early as possible to book the desired Nile cruise, spaces will be secured upon receiving a deposit of 25 %, and during the Christmas and New Year holidays, the required deposit is 50%. This deposit forms part of your final payment. Deposits can only be made by credit cards, wire transfer and or the Western Union