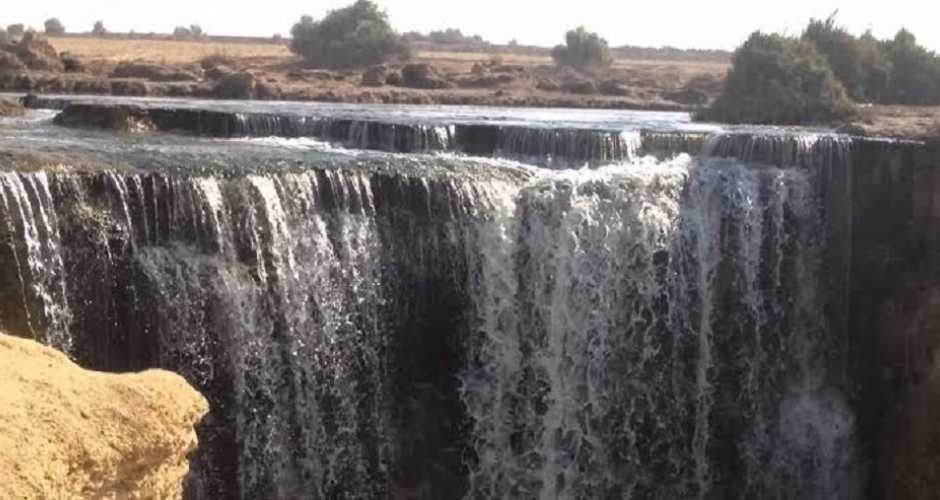 The Fayoum, located less than a hundred kilometres from Cairo and with its rich heritage of flora and fauna and archaeology, is one of the most beautiful and fertile regions of Egypt. in addition, it includes two areas declared as protected by the Egyptian Government: Lake Qarun and Wadi Rayan National Parks.The Fayoum is divided into six administrative centres of which the chief towns are Madinat al-Fayoum, Tamiya, Sinnuris, Ibshawai, Yusuf al Siddiq and Its – comprising approximately 157 villages and 1565 hamlets with a population of more than 3 million inhabitants. the total surface of 4678 sq. Km. the cultivated area is 1437 sq. Km 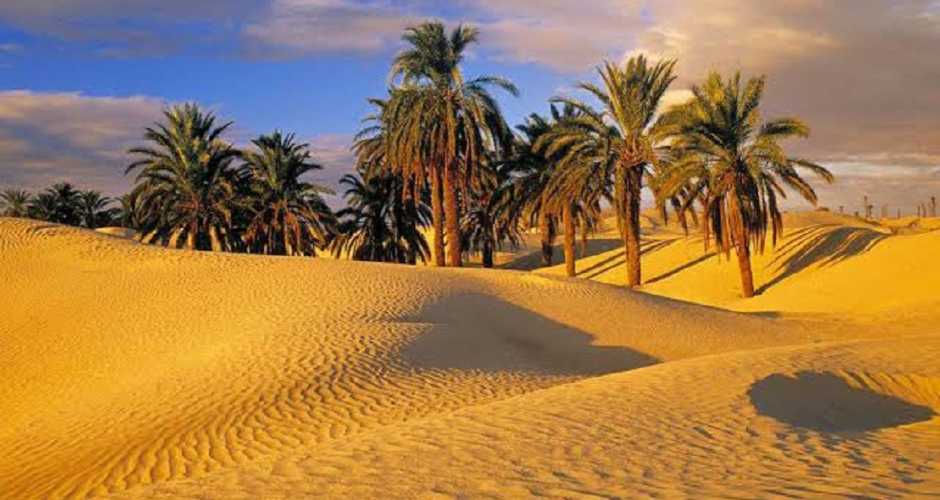 The northern part of the depression is entirely below sea level that contains the lake which lies at around 45 meters below sea level. the depression is bounded on the northwest by high limestone scarp. to the southwest of The Fayoum is a smaller depression, Wadi al Rayyan, reaching 43 meters below sea level. This has no natural water supply and no soil, but water has recently been channelled in to form two large lakes.  Fayoum passed several different names through the ages until it reached its present name … In ancient Egypt, specifically in the Old Kingdom Fayoum was called “Shedet” in the sense of the lake and in the middle kingdom, it was called “Ta – She,” meaning the land of the lake.The modern name of the city comes from Coptic ” Pa-Ym” whence the proper name payom, meaning the Sea or the Lake, which in turn comes from late Egyptian pA y-m of the same meaning, a reference to the nearby Lake Moeris. It has been named Al Fayoum after the Arab conquest of Egypt. 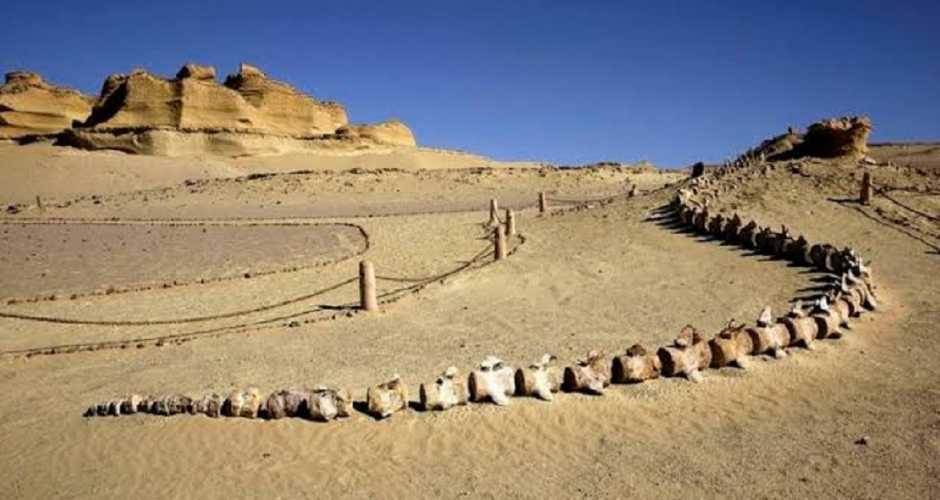 Fayoum enjoys a hot dry climate, rare rain in the winter the temperature ranging in the winter (Hi) between 11 and 17 and (low) of 4 and 10 degrees in January, and the average annual rainfall is around 17 mm.

Think to visit 5000-year-old tombs and temples is peering into antiquity? Try 40 million-year-old whales! Wadi Al-Hitan, 150 miles southwest of Cairo, is a UNESCO heritage site, remnants of the ancient Tethys Sea when Egypt was covered with water and sea cows, crocodiles, and turtles swam. But its greatest claim to fame is the glimpse it provides into the evolution of whales.
Fifty million years ago, whale ancestors walked on land while also hunting in the shallow seas, much like sea otters do today. Over the next 10 million years, archeocetes (ancient whales) evolved a more marine lifestyle. In 2016 the Wadi Al Hitan Fossil and Climate Change Museum opened with excellent exhibits in English and Arabic describing the environmental changes over time in the area and how land-based mammals evolved to return to the sea. But the fossils are not just in display cases. Entire skeletons of Basilosaurus and Dorudon that still retain small hind limbs not seen in modern whales are on display along a walking trail littered with invertebrate fossils and bone bits.Wadi Al-Hitan receives only about 1000 visitors a year. Access is via 4 WD vehicles over a sand blown road. Our driver enjoyed giving us an extra thrill going off-road at times to navigate sand dunes and showing off his vehicular acrobatics. 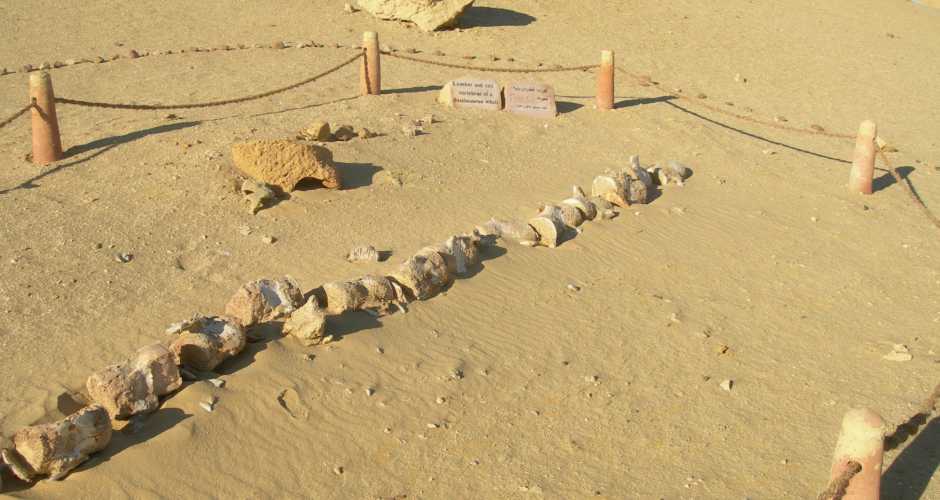 The waterwheels in Fayoum are among the most interesting ancient sites in Fayoum, Over 200 of them straddles the Canals, Unique to the area, the wooden wheels are driven by fast-moving water of the Canals and were introduced into Fayoum during the Ptolemaic times.They are 4 to 5 Meters in Diameter and Coated with black tar to Protect the wood, Each waterwheel Can lift the water 3 meters, Spilling it onto higher ground, January is the Month set aside throughout Egypt for Cleaning the Canals, The sluices are closed in the Fayoum all the functioning waterwheels are Cleaned and repaired.In addition to the Four moaning and groaning in the Center of the City, The Famous seven,  a hallmark of Fayoum of Fayoum are located in the Countryside  along Bahr sinnuris, There are  additional waterwheels on various Canals in the Area 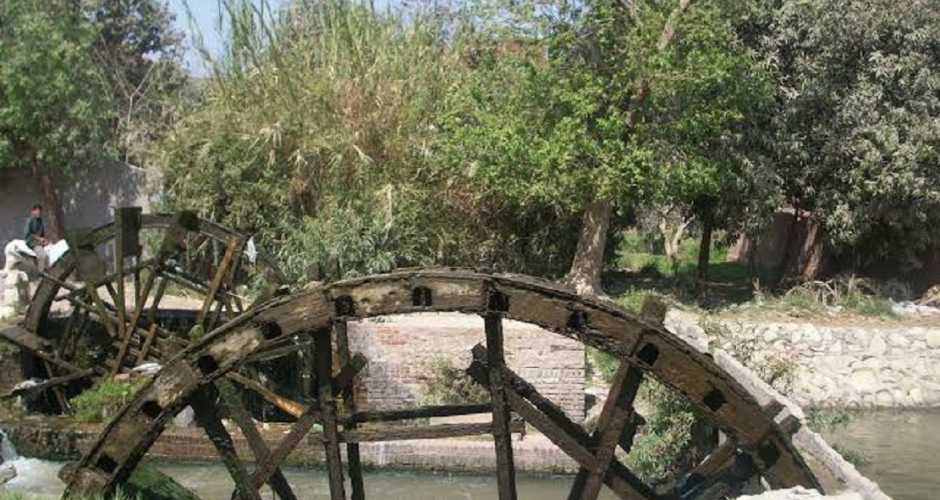 3- THE PYRAMID OF HAWARA

The Pyramid of Hawara ( Arsinoiton Polis) was built by the King Amunemhat III during the twelfth Dynasty  The Pyramid,  it `s casing removed in the Roman times, looks like a heap of rubble, but the site was one of the most important archaeological discoveries in Egypt.The Mortuary temple was the labyrinth that so mazed The greek traveller ( Herodotus) I visited this Place and found it to surpass the descriptions( He said the Labyrinth was believed to have been hewn from one single rock and Contained over 3000 rooms, It was also mentioned by almost every ancient traveller Strabo, DiodorusHere at Hawara 146, Fayoum portraits were found in the Cemetery North of the Pyramids( You Can see a few of them  at Kom Aushim Museum and in Cairo Museum) 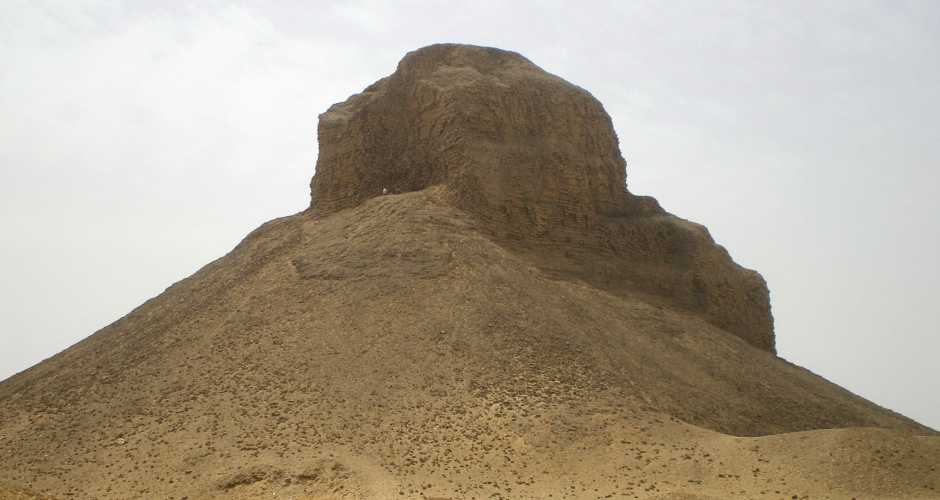 The Museum is Good Place to pick guides to all parts of Fayoum. The Museum was originally erected in 1974. It Exhibits artefacts dating from Prehistoric to Roman Periods it Also Exhibits Fayoum Portrait Karanis( The Lord`s Town) is one of the Largest Greco Roman Cities in the Fayoum. Founded in the Third Century B.c and Originally inhabited by the Mercenaries of Ptolemy the Second`s Army. The City has two temples 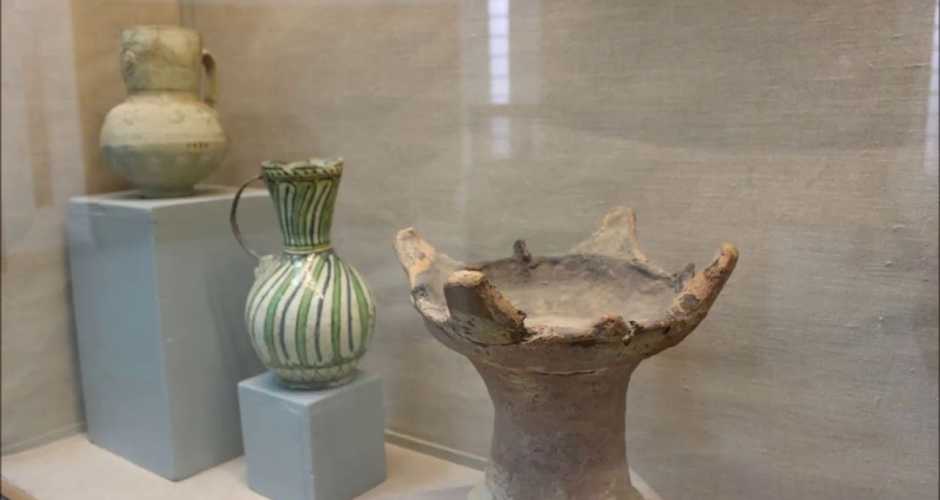 Located less than two hours away from Cairo, Wadi El Rayan is one of Egypt’s most famous nature reserves. Named after King El Rayan Ibn El Walid who had lived in the area with his army, the nature reserve is part of El Fayoum governorate and located about 75 km away from El Fayoum city.Wadi El Rayan is a depression 42 Meters below sea level and covers 673 K.m.In 1966 this depression became water reservoir when it was connected with Qarun Lake by underground Pipes 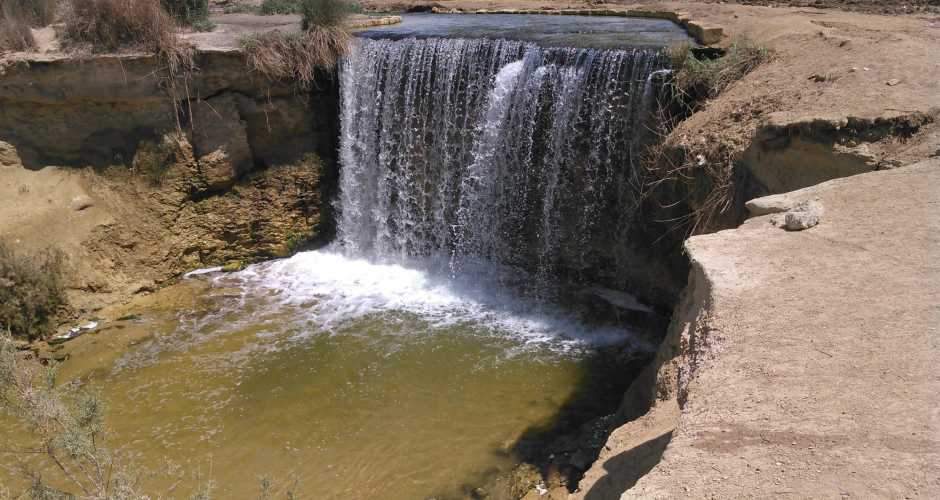 6- THE MAGIC LAKE AND GEBEL AL-MUDAWARA

One of the most beautiful lakes in Egypt, overlooking sand dunes, is the Magic lake. Around the lake gives you the chance to witness one of the most eye-catching sunsets you will ever see.The Magic Lake is a beautiful lake located in Wadi El Rayan in Fayoum. It was named the Magic lake as it changes its colours several times a day depending on the time of year and the amount of sunlight it receives.It is an amazingly beautiful place surrounded by desert. People spend their time hiking & sand-boarding beside Magic Lake or even swimming in the lake itself.The lake contains minerals that are said to help treat patients with rheumatism.
It’s simply a magical place for a magical trip. 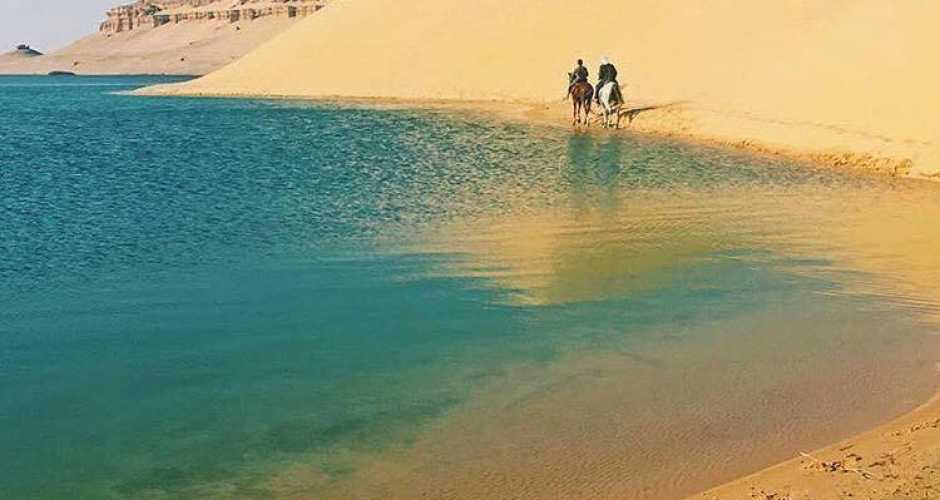 Madinet Madi, The City of the Past is considered by some to be the most important ancient site in the Fayoum, It has a middle Kingdom temple, built in the twelfth Dynasty by Amunmehet III and dedicated to Renenutet, The Serpent Goddes, The temple has been Expanded during the Ptolemaic times 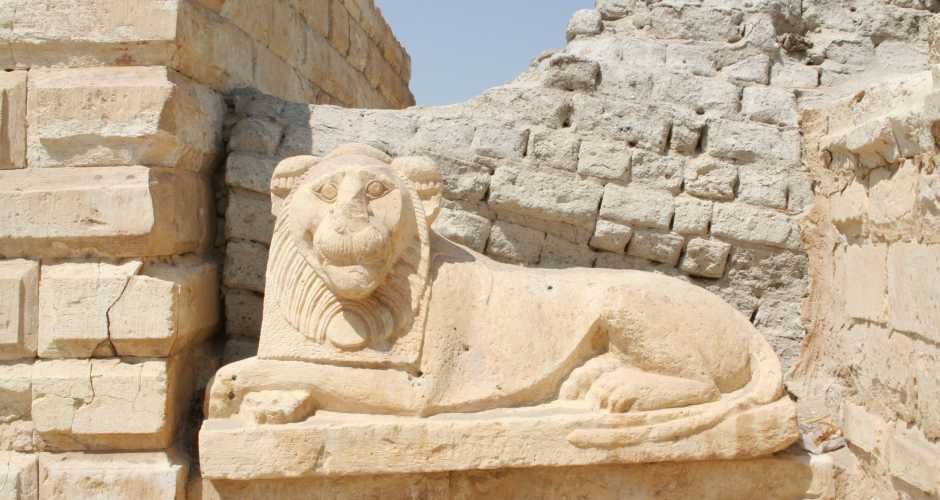 Dimeh al-Siba (Dime, Dimia, and nearby Qasr al-Sangha) on the northern side of Lake Qaroun is one of the most interesting in the Fayoum,Dimeh al-Siba, Dimeh of the Lions, was a Ptolemaic city believed to be founded by Ptolemy II in the third century BC, on a site that shows evidence of habitation from the Neolithic period. Today, it is more isolated, but during Ptolemaic times it was at the shore of the much larger lake, situated at the edge of Moeris Bay and the beginning of the caravan routes into the Western Desert, The ruins of Dimeh al-Siba contain the two temples, houses, underground chambers, streets and ten-meter high walls that are sometimes up to five meters thick. The walls themselves are a testament to the survivability of mudbrick in the desert environment. The ground is strewn with debris. An uncountable number of shards cover the entire temple mound. 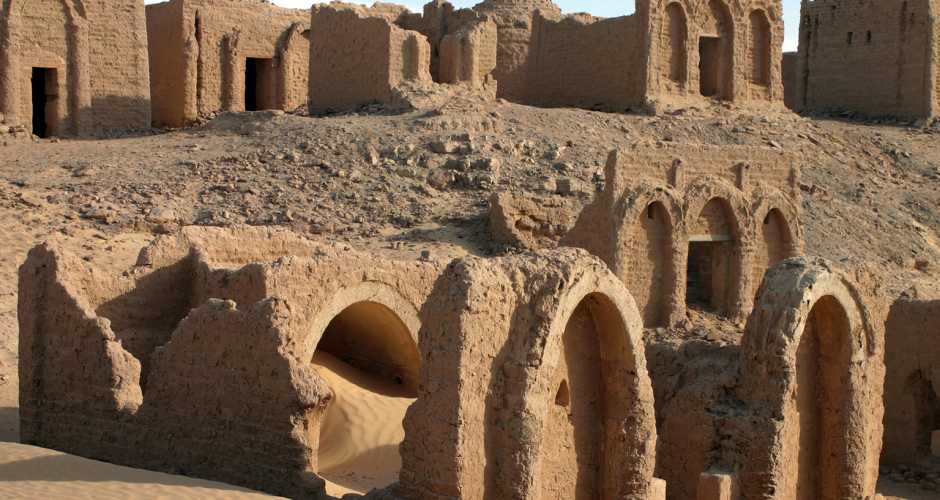 9-THE PETRIFIED FOREST OF FAYOUM

Situated in the north of Lake Qaroun in Gabal Qatrani is the largest petrified forest in the world, home to 40 meters high trees that have survived in ossified form for thousands of years 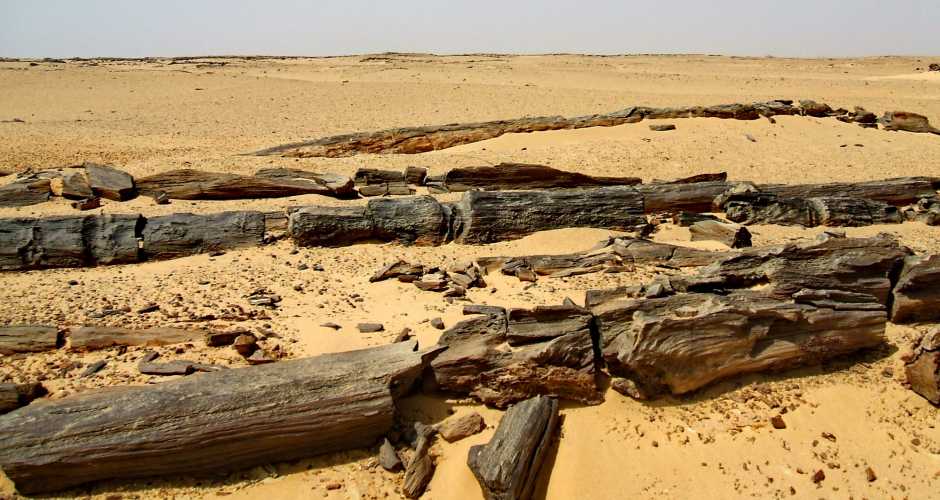 The Golden Fortress(Qaser Al Sagha) is an unusual  Middle kingdom, The building situated North of the lake, The temple is constructed of limestone. The Function of this unusual temple is unclear. 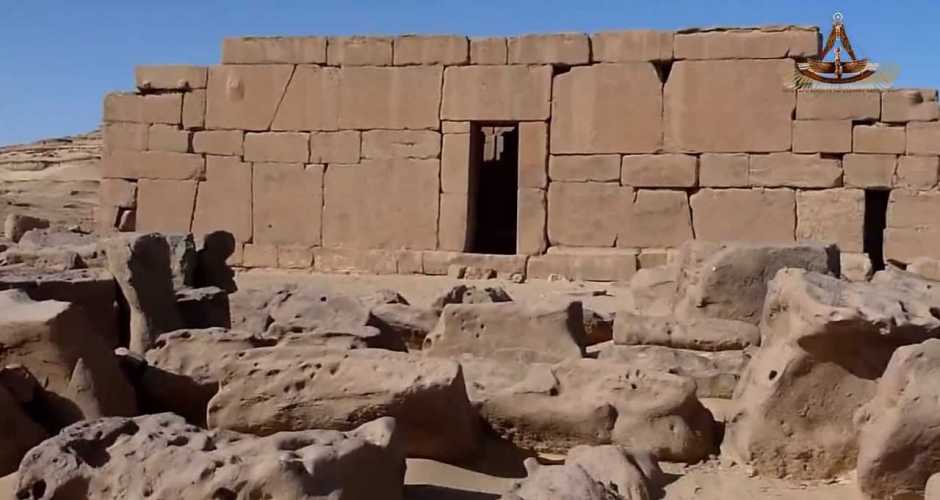