Largely built by the New Kingdom pharaohs Amenhotep III (1390–1352 BC) and Ramses II (1279–1213 BC), this temple is a strikingly graceful monument in the heart of the modern town. Also known as the Southern Sanctuary, its main function was during the annual Opet celebrations, when the statues of Amun, Mut and Khonsu were brought from Karnak, along the Avenue of Sphinxes, and reunited here during the inundation. 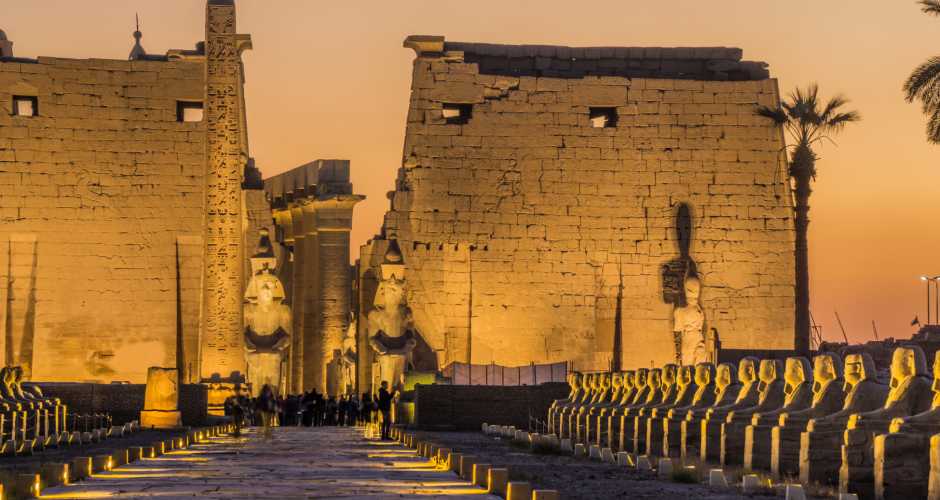 The temple is less complex than Karnak, but here again you walk back in time the deeper you go into it. In front of the temple is the beginning of the Avenue of Sphinxes that ran all the way to the temples at Karnak 3km to the north, and is now almost entirely excavated. Access to the site in modern times is by a gate thought to have been constructed during the Roman period. In ancient times, the temple was approached by a long avenue, which connected Karnak and Luxor temples, leading to the first pylon. Nectanebo I lined this processional road with human headed sphinx but this was a rather late addition to the site (dynasty 30) and it is thought that he merely built over an existing processional way. The original road may have been constructed by Hatshepsut and Amenhotep III later added to the avenue by lining it with ram-headed sphinx. The entire site is surrounded by a large mudbrick enclosure wall built by Nectanebo I. 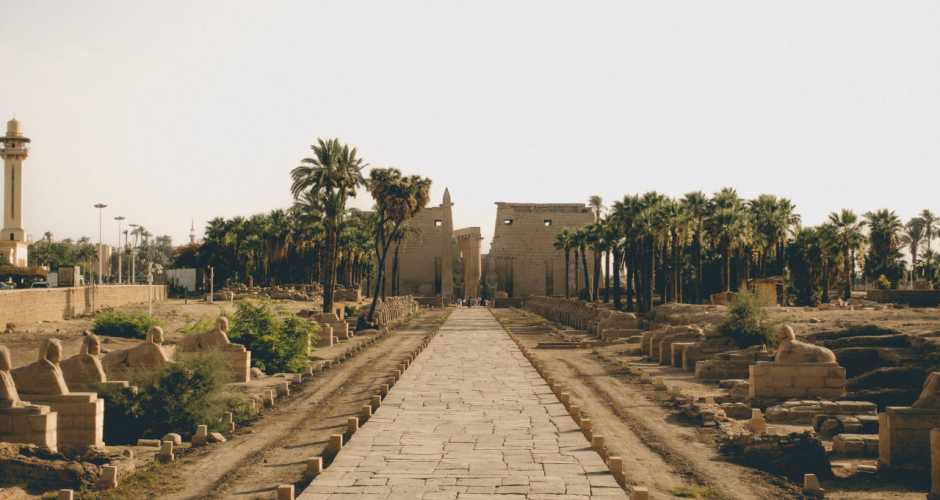 The pylon was half buried in sand until the 1880s but when cleared it revealed two towers measuring 24 meters high and 65 meters wide. They are carved in sunken relief depicting Ramesses at the battle of Kadesh.The entrance to the temple itself is known as the first pylon. It was built by Ramesses II and was decorated with scenes of his military expeditions, in particular his triumph at the battle of Kadesh. The pylon towers originally supported four huge cedar flag masts from which banners would have fluttered in the breeze. Later pharaohs (most notably the Nubian kings of dynast twenty-five) added scenes recording their own military triumphs to the first pylon. This entrance was flanked by six massive statues of Ramesses, two seated and four standing, but unfortunately the two seated statues are still relatively intact. 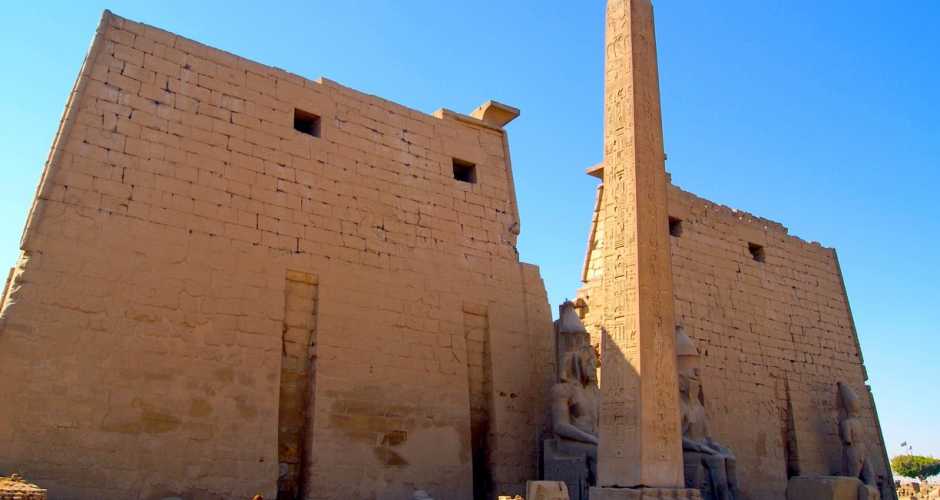 There is also a twenty-five metre pink granite obelisk also built by Ramesses just inside the gateway. It is one of a pair – the other now stands in the Place de la Concorde in Paris. The four sacred baboons who greet the morning sun are carved on the pedestal and the names and epitaphs of Ramesses appear on each side of the obelisk.

Two large statues of Ramses II give way for the guests to enter into the section of the remarkable columns of Amenhotep III. This section consists of 14 large columns with each being 19 meters long. The walls of this section are decorated with scenes from the Opet festival, a famous religious event when King Amun used to meet his wife, Mut, once every year in ancient Egypt.

In this section, there is a marvelous scene displayed on its walls that show the Temple of Luxor when it was first constructed with its six statues of Ramses II, all its obelisks before being donated or broken, and all the sections of the temple. There is also this wonderful scene of the sons of Ramses II who are taking the offerings to the god Amun and his wife; Mut

The great Court of Rameses II is 188 feet (57 m) long and 168 feet (51 m) wide. Seventy four papyrus columns, with bud capitals surround it and in the Northwest corner of the court there is a shrine to Thutmose III, while in the southern part of the court there are a number of standing colossi of Ramses II.

Beyond lies the Great Court of Ramses II, surrounded by a double row of columns with lotus-bud capitals, the walls of which are decorated with scenes of the pharaoh making offerings to the gods. On the south (rear) wall is a procession of 17 sons of Ramses II with their names and titles. In the northwestern corner of the court is the earlier triple-barque shrine built by Hatshepsut and usurped by her stepson Tuthmosis III for Amun, Mut and Khonsu. Over the southeastern side hangs the 14th-century Mosque of Abu Al Haggag, dedicated to a local sheikh, entered from Sharia Maabad Al Karnak, outside the temple precinct. 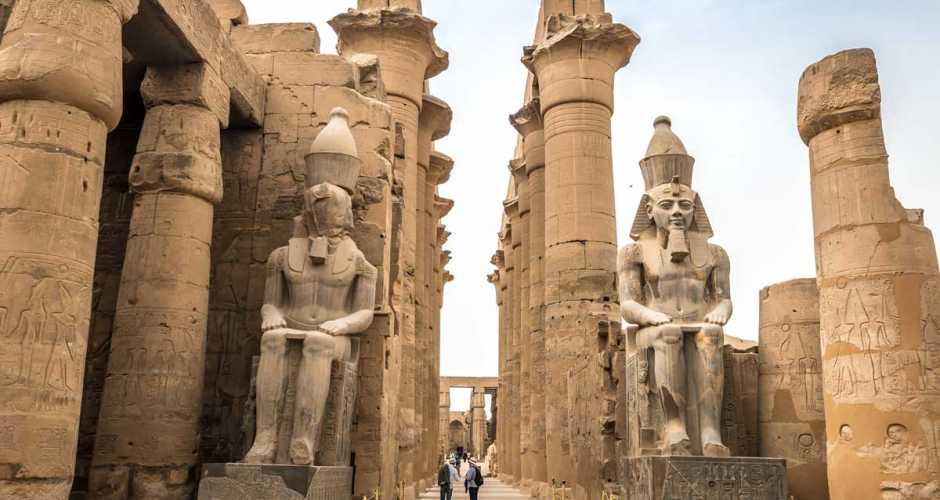 The peristyle courtyard leads to the processional colonnade built by Amenhotep III with additional decorations added by Tutankhamen ,Horemheb and Seti I. By entrance to the colonnade there are two statues representing Tutankhamun, but on each his name has been replaced by that of Ramesses II. It is lined with fourteen huge papyrus topped columns and the walls are decorated with scenes depicting the stages of the Opet Festival. Other decorations celebrate the reinstatement of Amun and the other traditional gods following the Atenist heresy. They are ascribed to Tutankhamun, but his name has been erased and replaced by that of Horemheb.

The walls behind the elegant open papyrus columns were decorated during the reign of the young pharaoh Tutankhamun and celebrate the return to Theban orthodoxy following the wayward reign of the previous pharaoh, Akhenaten. The Opet Festival is depicted in lively detail, with the pharaoh, nobility and common people joining the triumphal procession. Look out for the drummers and acrobats doing backbends. South of the Colonnade is the Sun Court of Amenhotep III, The Court of Amonhotep III measures 148 feet long (45 m) by 184 feet wide (56 m), with double rows of papyrus columns on three sides. The northern end was originally the entrance to the temple.

In 1989 workmen found a cache of 26 statues here, buried by priests in Roman times, now displayed in the Luxor Museum.The cache, similar to one found in Karnak in 1903, included statues of gods, goddesses, queens, kings and kings as gods, as well as triads of divinities and royal groupings. The most amazing statue in this cache was a larger than life sized statue of Amenhotep III, carved from red-gold quartzite. 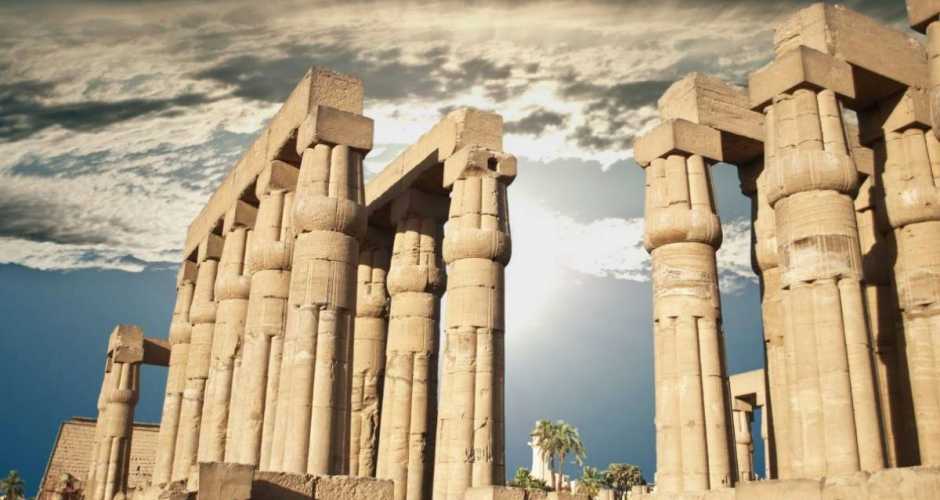 At the back of the Great Sun Court, at its southern end, a hypostyle hall is blended in almost imperceptibly. It is described as a hall of appearance (wsekhet kha'it). It consists of four rows of eight bundle papyrus columns that once supported a now non-existent roof. Through the center of these columns runs an aisle. On the walls of this chamber Amenhotep III is depicted before the gods of Thebes ceding the temple above a plinth of figures personifying the Egyptian nomes.

Beyond lies the Hypostyle Hall, the first room of the original Opet temple, with four rows of eight columns each, leading to the temple’s main rooms. The central chamber on the axis south of the Hypostyle Hall was the cult sanctuary of Amun, stuccoed over by the Romans in the 3rd century AD and painted with scenes of Roman officials: some of this is still intact and vivid. Through this chamber, either side of which are chapels dedicated to Mut and Khonsu, is the four-columned antechamber where offerings were made to Amun.

This hypostyle hall leads to a smaller eight columned hall or portico which originally opened into the inner temple, but which was transformed by the Roman legion stationed at Luxor into a chapel dedicated to the imperial cult. At that time, the columns were removed. It contained the standards of the legion, and its south doorway was blocked with an apse painted with figures Emperor Diocletian, c 284-305 BC, and his three coregents, There is also a stairway in the chamber, and it is flanked by chapels dedicated to Mut and Khonsu. 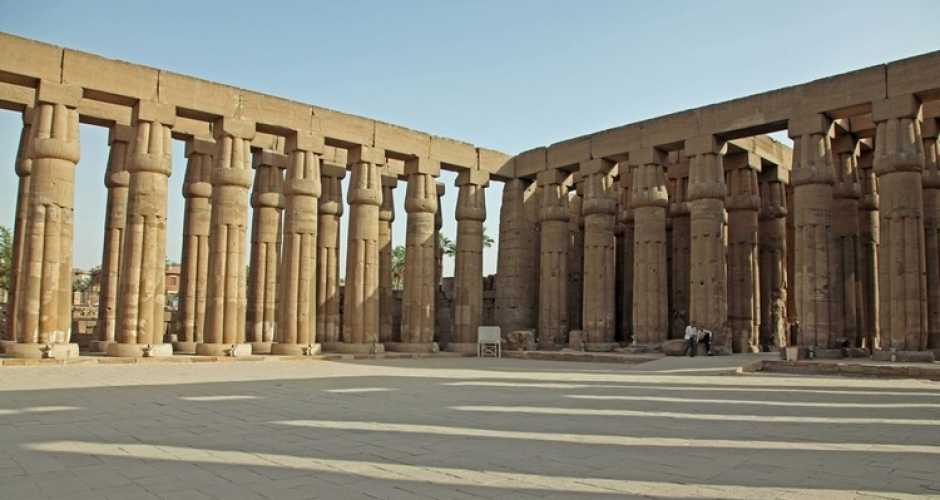