The site of Abu Simbel is one of the most recognizable ancient sites in Egypt. For 3,000 years, it sat on the west bank of the Nile River, between the first and second cataracts of the Nile. However, in a remarkable feat of engineering, the temple complex was dismantled and rebuilt on a higher hill to make way for the Aswan High Dam in the 1960s.

Built in 1244 B.C., Abu Simbel contains two temples, carved into a mountainside. The larger of the two temples contains four colossal statues of a seated pharaoh Ramesses II (1303-1213 B.C.) at its entrance, each about 69 feet (21 meters) tall. The entranceway to the temple was built in such a way that on two days of the year, October 22 and February 22, sunlight shines into the inner sanctuary and lights up three statues seated on a bench, including one of the pharaoh. Historians think these dates mark his coronation and birth. Thousands of tourists typically flock to the temples to watch the phenomenon and participate in the celebrations. 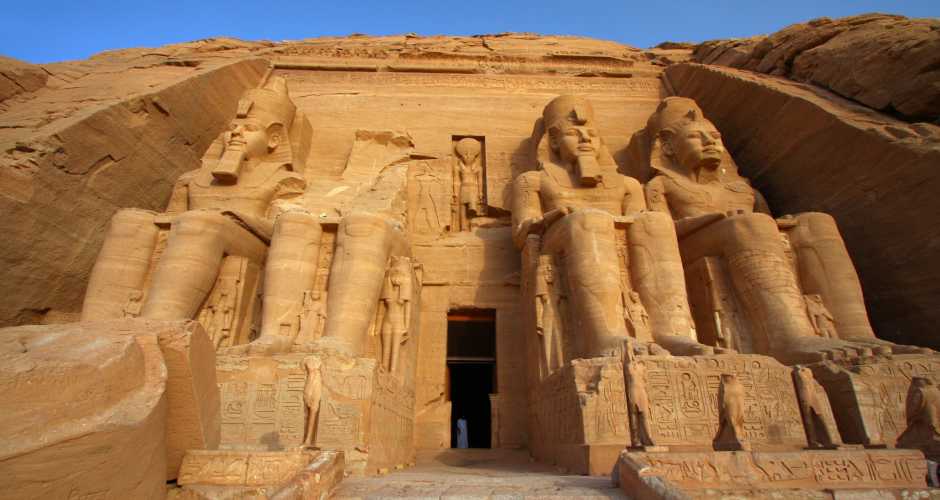 Abu Simbel was rediscovered in 1813 by Swiss explorer John Lewis Burckhardt. The temples had long been forgotten and the sands of the desert sands had covered all but the tops of the heads of the huge statues in front of their entrances. Since 1909 when the sand was finally cleared away, these twin temples have become the most famous site in Egypt’s south. 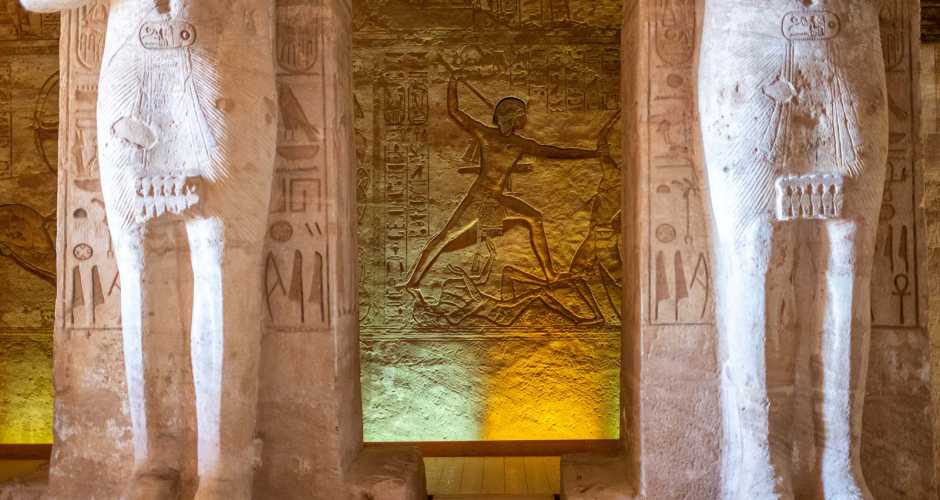 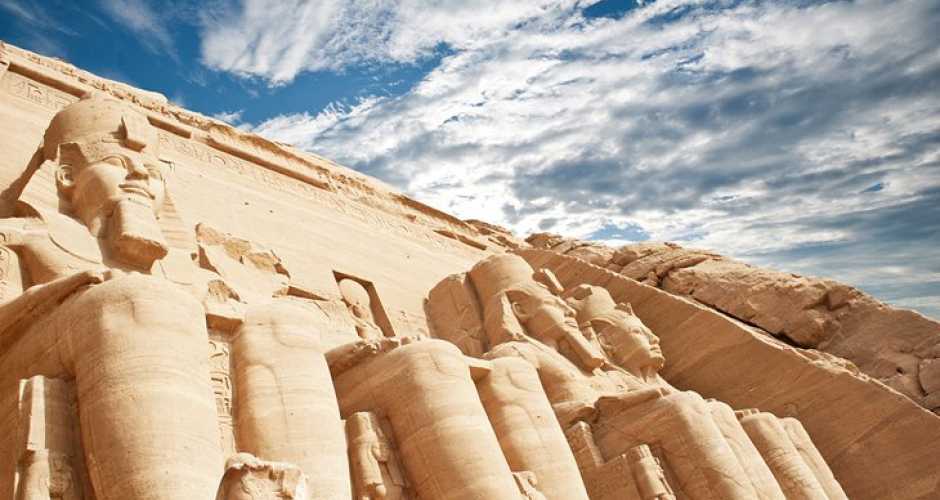 The temple has six colossal statues on its facade, four depicting Ramesses and the two showing Nefertari. The second temple is significant for the status that is affords to the wife of the pharaoh, depicting her several times on equal footing with the pharaoh. The larger temple is aligned with the sun so that twice a year the sun shines into its deepest recesses to illuminate a statue of Ramesses and the gods the temple if dedicated to. The Abu Simbel Sun Festival takes places on February 22nd and October 22nd of every year to much fanfare with several thousand people gathering early in the morning to see this testament to the knowledge and skill that the ancient Egyptians possesses in order to align the temple so perfectly. 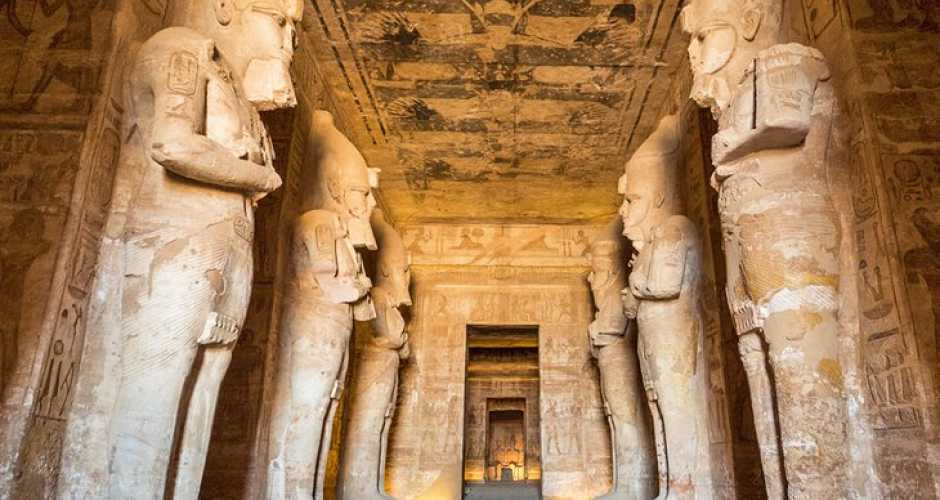 Abu Simbel survived through ancient times, only to be threatened by modern progress. Because the site would soon be flooded by the rising Nile, it was decided that the temples should be moved. “Following the decision to build a new High Dam at Aswan in the early 1960s, the temples were dismantled and relocated in 1968 on the desert plateau 64 meters (about 200 feet) above and 180 meters (600 feet) west of their original site,” writes Robert Morkot in an article in the "Oxford Encyclopedia of Ancient Egypt" (2001, Oxford University Press). The area where they were originally located is now flooded.

Hawass notes that moving the temples was a massive job, one that involved cutting it into pieces between 3 to 20 tons in weight and re-assembling them precisely as they were. It took almost five years, involved about 3,000 workers and cost (in the 1960s) about $42 million. He notes in his book that it was a great success, one reporter present at its completion wrote that “everything looks just as it did before; it is enough to make one doubt that the temples were moved at all.” 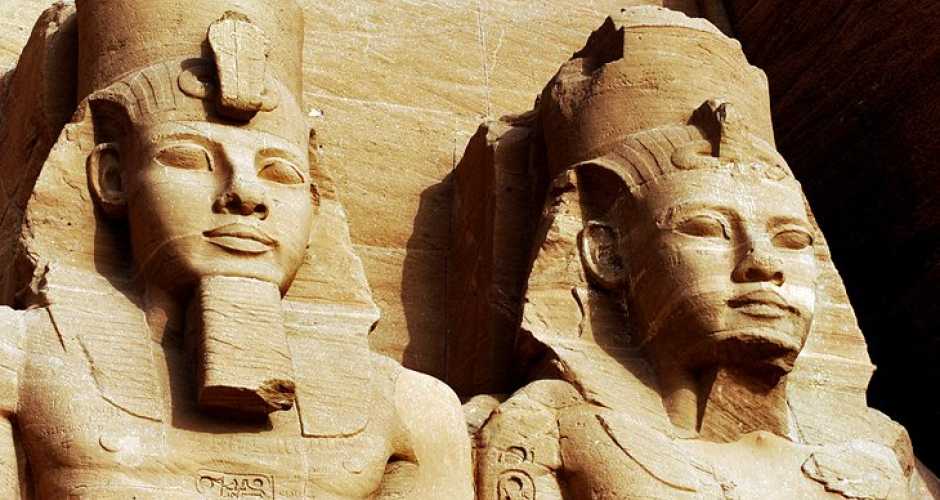 As mentioned earlier, the smaller temple at Abu Simbel has, outside its entrance, four statues of pharaoh and two of his bride, Nefertari. Each statue is about 33 feet (10 meters) tall, a buttress in between each of them. Zecchi notes that the facade also contains smaller statues of the children, “oddly the statues of the princesses are taller than those of the princes,” a sign, perhaps, that this temple pays tribute to Nefertari and the women of Ramesses II’s household.The interior of the temple is simpler than that of the great temple. It contains six pillars that show depictions of the goddess Hathor. Zecchi notes that on the “back wall of the room” are reliefs showing “Nefertari in the act of being crowned by the goddesses Hathor and Isis,” the queen wearing a head covering that shows “the solar disc with feathers between cow horns” the same head covering the goddesses are wearing. 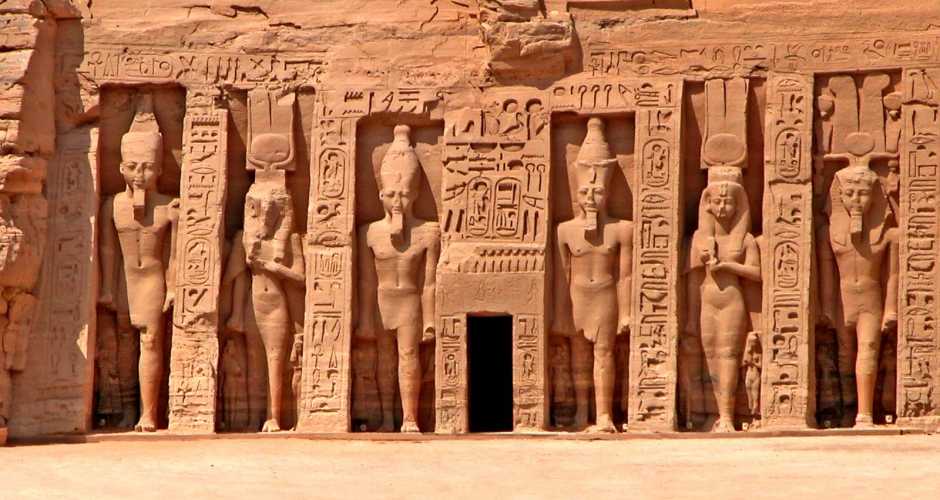