The temple at Kom Ombo is about 30 miles (48 km) north of Aswan and was built during the Graeco-Roman period (332 BC AD 395). There was an earlier structure from the 18th dynasty but little remains. The temple is unique because it is in fact a double temple, dedicated to Sobek the crocodile god, and Horus the falcon-headed god. The layout combines two temples in one with each side having its own gateways and chapels. SobekSobek is associated with the wicked god Seth, the enemy of Horus. In the Horus myth the allies of Seth made their escape by changing themselves into crocodiles. 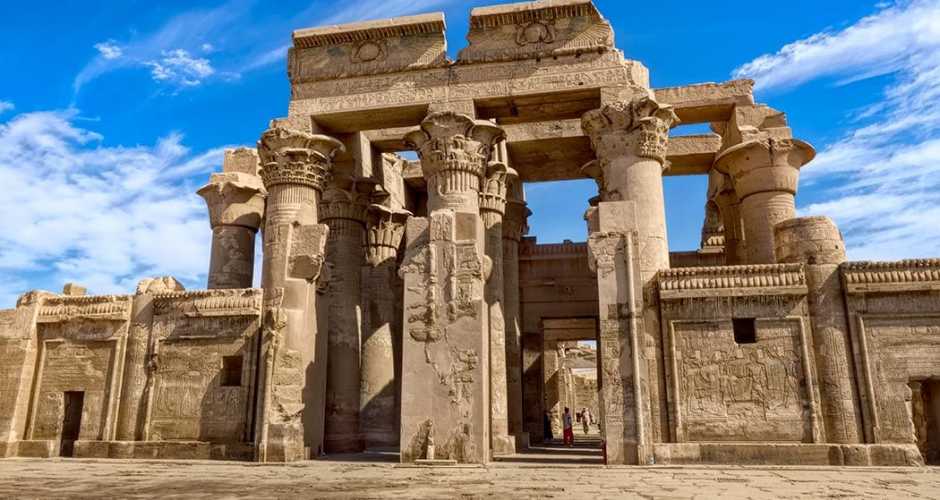 The word "Kom" in Arabic means the small hill and the word "Ombo", in the Hieroglyphic ancient Egyptian language, means "the gold". Therefore, the word Kom Ombo means the hill of the gold. The word Ombo actually originated from the Pharaonic word "Nbty", an adjective derived from the word Nebo that meant "gold". During the Coptic period, the word was slightly changed to become Enbo, and when the Arabic language became common in Egypt, the word became "Ombo". 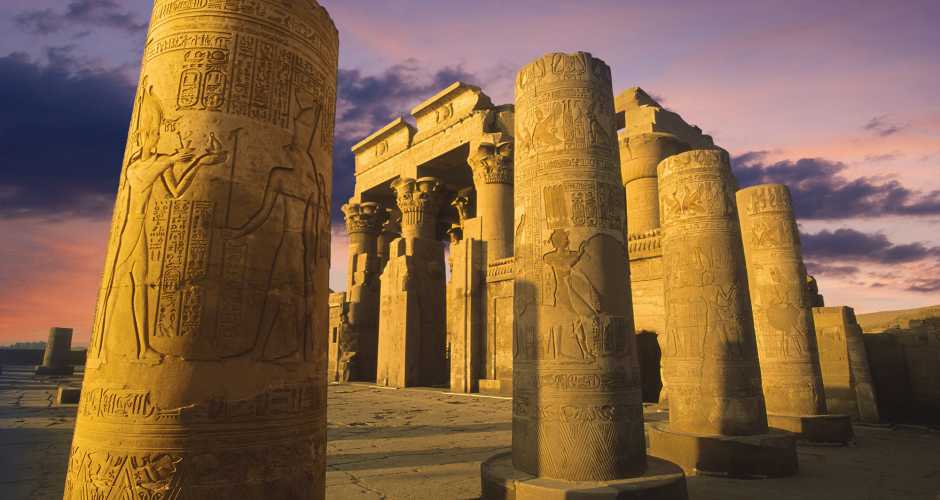 Although Kom Ombo is famous today for being constructed during the Greco Roman era, the area had been inhabited since the pre-dynastic period of Egyptian history and many ancient burial sites were discovered in and around Kom Ombo. The name of the town, Kom Ombo (or the hill of the gold), establishes how important it was for the ancient Egyptians from an economical aspect, despite the fact that the town never really flourished except when the Ptolemies took control of Egypt. The Ptolemies have constructed many permanent military bases near the Red Sea. This fostered commercial activities between Nile towns and these bases, especially Kom Ombo, which was a transit point used by many trading caravans. Kom Ombo's most glorious days were when the Romans ruled over Egypt. During this time, Kom Ombo became the capital and the administrative center of the province, and a large portion of the Temple of Kom Ombo was constructed and many other sections were restored and renovated. 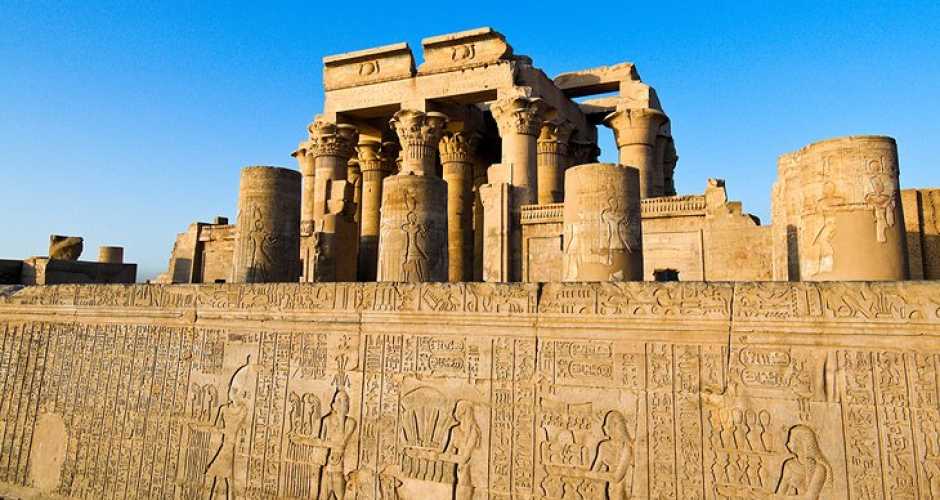 The Construction of the Temple

The Temple of Kom Ombo was constructed on the ruins of a much older temple called "Ber Sobek", or the house of the god Sobek. This older temple was erected by two 18th dynasty rules: King Tuthmosis III and Queen Hatshepsut, whose marvelous temple is still standing in the West Bank of Luxor. The temple of Kom Ombo was built during the period from 205 till 180 BC in the ruling period of King Ptolemy V. The construction process of the temple went on for many years afterward from 180 till 169 BC with each king having his addition to the complex. A large portion of the Temple of Kom Ombo, including the hypostyle hall, was constructed during the reign of Emperor Tiberius, from the year 81 till 96 BC. Work on the temple went afterward for more than 400 years during the ruling period of Emperors Caracalla and Macrinus until the middle of the 3rd century AD. 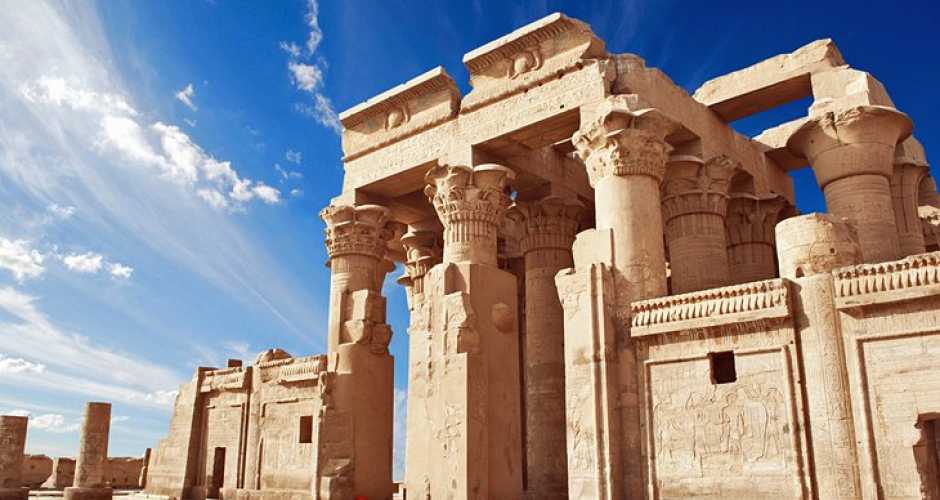 The Design of the Temple

The Ptolemies have constructed the Temple of Kom Ombo for the worship of two gods, Sobek; the crocodile god, and Horus, the falcon god. This is why the complex mainly consists of two parallel temples that include all the traditional components of such ancient Egyptian religious structures are present in the two temples. The Temple of Kom Ombo was constructed mainly with limestone in the shape of a rectangle, with a plan and a design which is quite similar to many temples constructed in the Greco Roman period. Such examples are the Temples of Dendara and Philae which are considered among the most important monuments in Upper Egypt, visited annually by numerous tourists.The design of the Temple of Kom Ombo starts with a front courtyard, a hypostyle hall following that, afterward there are three inner halls, and then two sanctuaries; one dedicated to Sobek and the other to Horus. 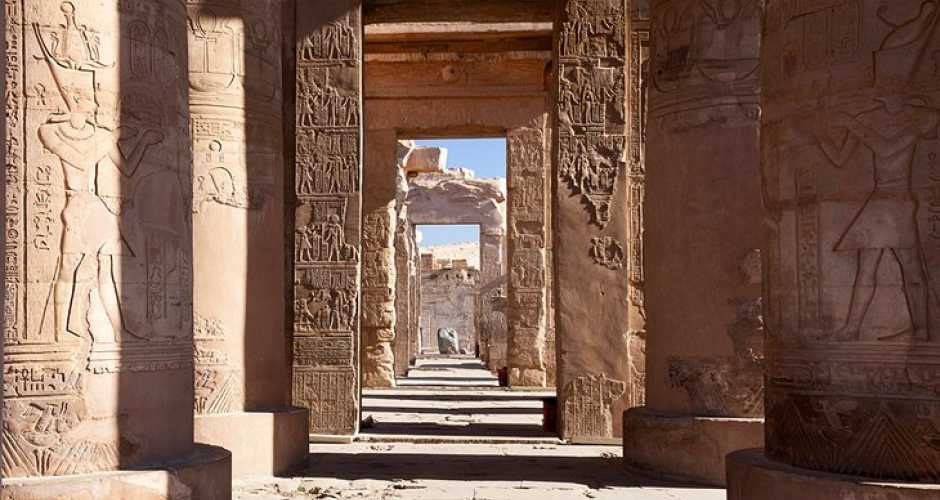 Kom Ombo's Pylon originally had two gateways, but the left-hand half has completely disappeared, and only the lower parts of the central pillar and the right wing survive. As you enter, look to the right-hand front wall to see (from left to right) the gods Sobek, Hathor, and Khons; a hieroglyphic text of 52 lines; and a relief of the Roman Emperor Domitian wearing the crowns of Upper Egypt. 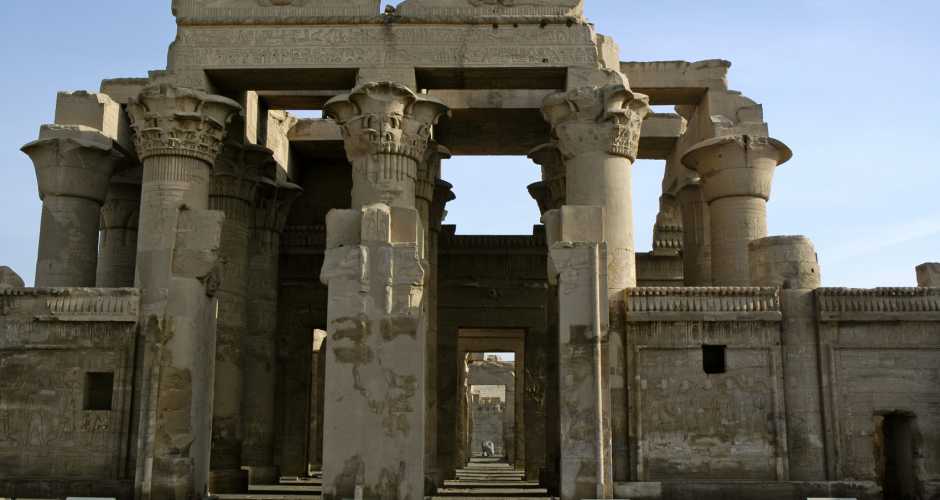 Just as at Edfu's Temple of Horus, the Forecourt here was originally surrounded on three sides by colonnades, but only the lower halves of the 16 columns remain today. The reliefs here - depicting Tiberius making offerings - are remarkable for the freshness of their coloring. In the center of the courtyard is a square altar base, while along the far side are stone screens 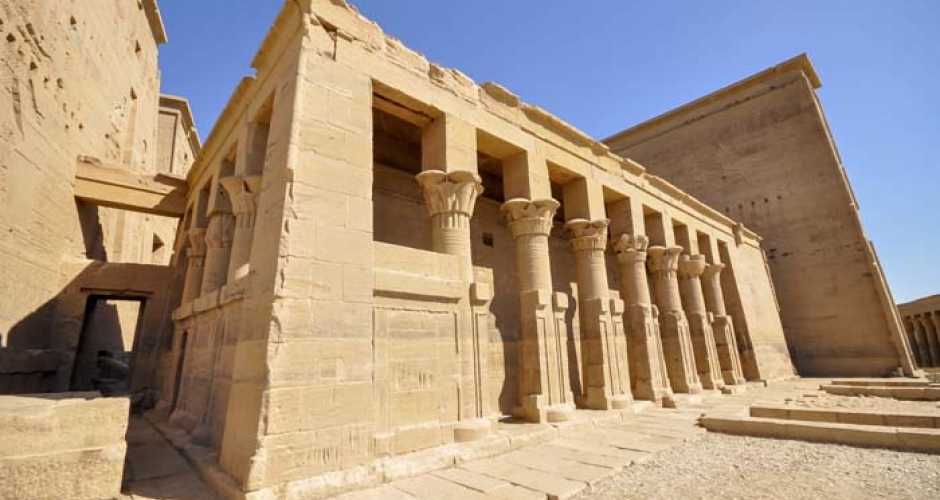 The Vestibule's 10 columns are gorgeously decorated with rich palm capitals, while both the walls and columns are embellished with reliefs. Check out the ceiling over the main two aisles, with its paintings of flying vultures.  The mural reliefs in the Vestibule are particularly fine. Look for the mural left of the north doorway, which depicts Neos Dionysos in the presence of Haroeris being blessed by a lion-headed Isis. 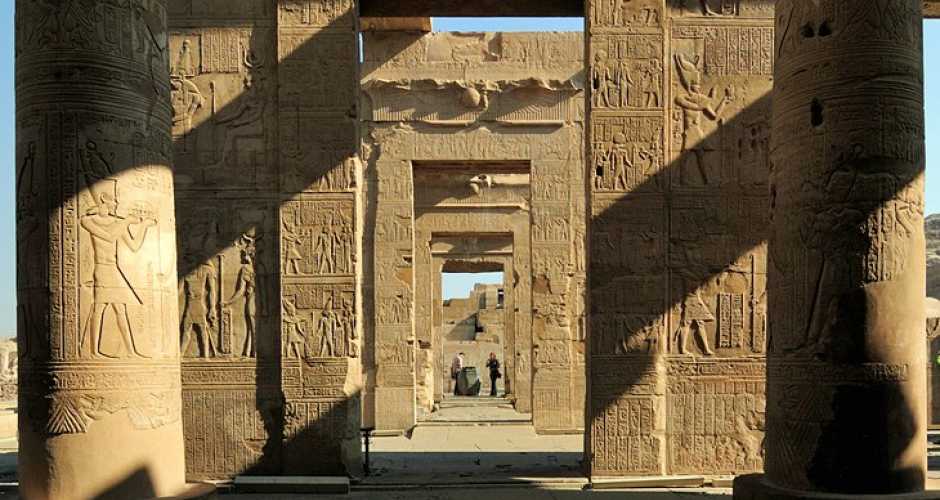 Two doorways lead you from the Vestibule into the Hypostyle Hall with its roof supported by 10 papyrus columns boasting floral capitals. On the column shafts, Euergetes is depicted making offerings to various gods, while the reliefs on the walls show him in converse with the gods. Between the doors from the vestibule is the sacred crocodile of Ombos. Between the doors leading into the rear part of the temple are reliefs of Euergetes II's elder brother, Philometor, making an offering to the falcon-headed Haroeris. The loveliest relief here is found on the left-hand (northern) wall. Here, you can see the falcon-headed Haroeris presenting the Ptolemaic era pharaoh with the curved sword of victory and the hieroglyph for eternal life. Just behind the pharaoh are his sister Cleopatra VII and his wife Cleopatra. 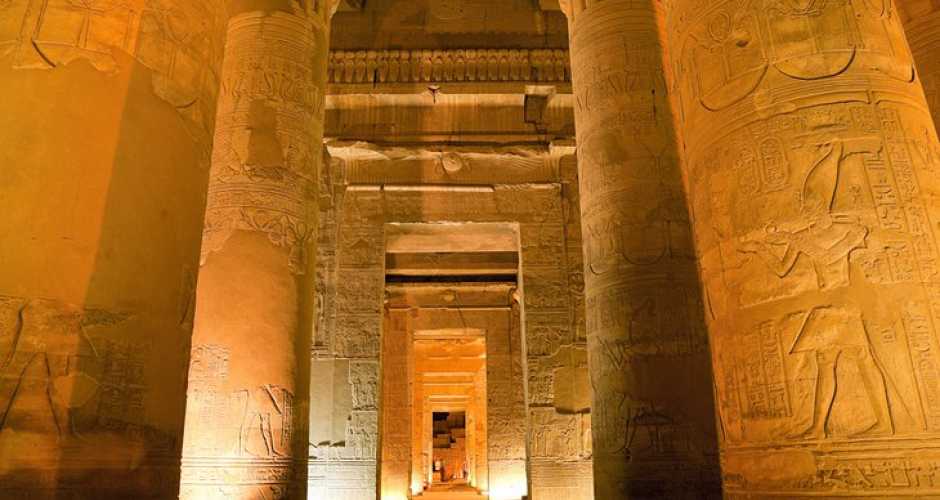 Three Antechambers lead off from the Hypostyle Hall, gradually leading you into the inner temple area. All the walls here are covered with fine reliefs. As you walk through, notice how each antechamber is slightly higher than the one before. The small rooms on the left-hand side of the Antechambers would have once served as temple store rooms. On the rear wall of the third antechamber, look between the two doors to see a fine relief of Philometor in a long white mantle, with Cleopatra behind him, standing before the falcon-headed moon god Khons, who is writing the pharaoh's name on a palm branch with the symbol for a long reign. To the rear are the principal gods of Ombos, Haroeris, and Sobek. 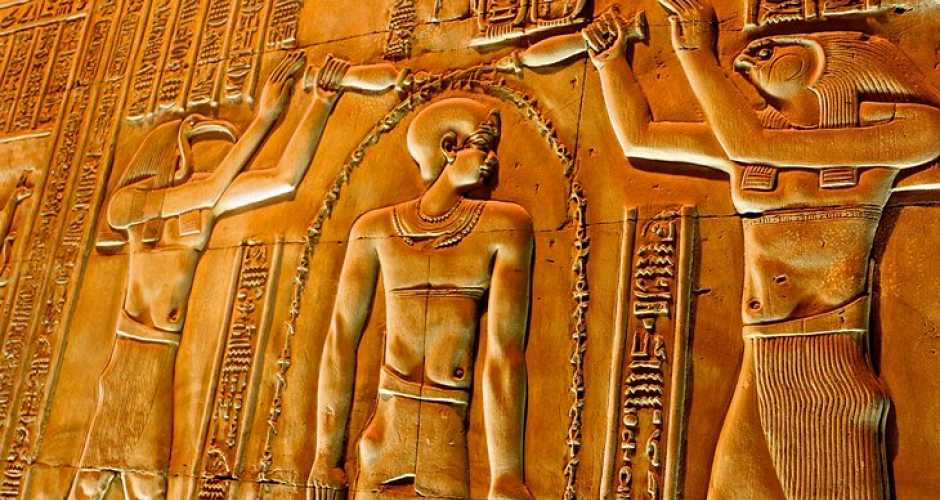 Enter through the two doors in the rear wall of the third antechamber to arrive in the temple's sanctuary area, split into two here to worship both Haroeris (to the left) and Sobek (to the right). The black granite base in each sanctuary was for the sacred barque, which would have held the image of the god. Around the chapels were a number of smaller rooms with crypts.

If you walk back to the Vestibule, you can enter the temple's Inner Passageway. At the far end are seven small chambers with unfinished reliefs, which show different stages of the artist's work and several inscriptions that were sketched out but never completed