The Serapeum at Saqqara

Serapeum, the burial place of the Apis bulls, also called the house of Osarapis by the Ancient Egyptians. (The term 'Serapeum'
properly refers only to the temple above ground.) The visitor usually sees only the underground rock-cut chambers. The Avenue of Sphinxes leading to this complex from the E was discovered by Mariette in 1850. He found that the sphinxes led to a dromos
containing Greek statues of animals connected with the rites of Dionysius-peacocks, leopards and mythological creatures-and also
a semicircle of Greek philosophers and poets that stands before a Temple ofNectanebo II (largely ruined). The cult of Serapis was introduced into Egypt from Europe by Ptolemy I with the intention of providing a god capable of being worshipped by both Greeks and
Egyptians. Apis bulls were considered sacred from very early times in Egypt, as a representation of the soul of Ptah, and they also had close connections with Osiris as deliverers of oracles. In addition, other gods such as Anubis, one of the gods associated with embalming, were worshipped here. 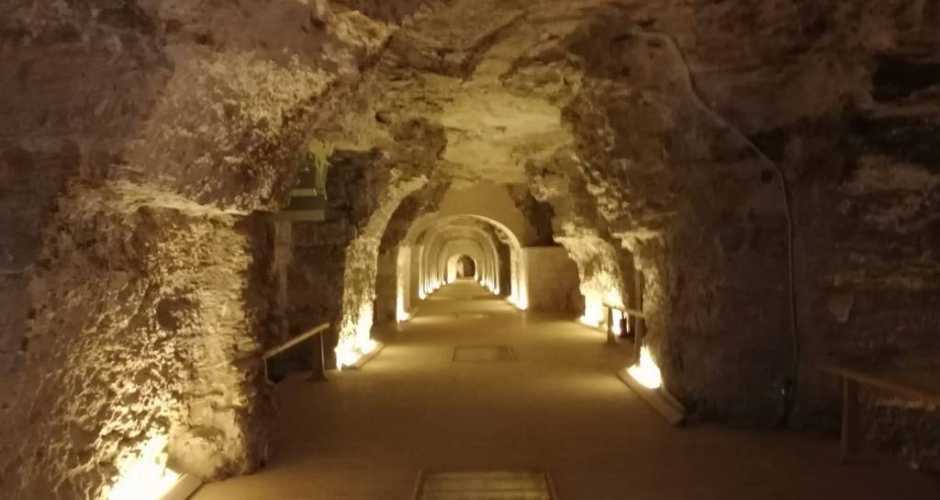 The Serapeum of Saqqara has been a continuous source of speculation and mystery since its re-discovery in 1850. Even now, no theory has been able to explain exactly how or why the 24 giant sarcophagi were moved to the site and precisely installed in their notches. The mainstream theory suggests the site was used for the burial of Apis bulls, though there are many elements which do not add up with this belief.

For example, the size of the boxes exceeds the size of the bulls; was it done to provide extra comfort for them? Why not do the same for the pharaohs, who were buried in tiny coffins barely fitting their bodies? Why did they make the Serapeum sarcophagi out of granite and not with limestone, a material much easier to work with? And if Serapeum was the burial site for the Apis bulls, where are the bull mummies? 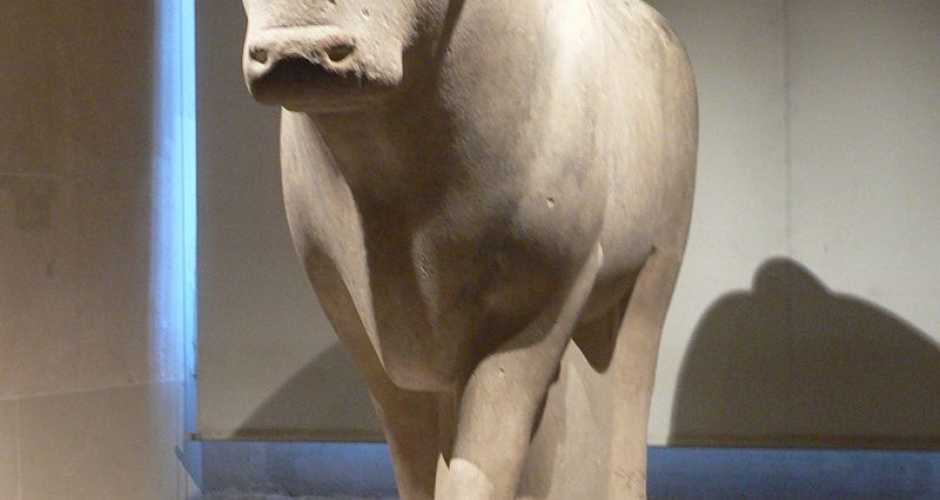 The actual burial place of the bulls was discovered after a long searchin 1851 by Mariette from the Temple of Nectanebo II situated above it.There are several galleries dating from Amenhotep IV-Ramesses II from the 19 Dynsty. until Psamtik I (26 Dyn.) and from then to the Ptolemaic era. At the entry is a series of niches which once contained official and private stelae (now in the Louvre) recording  many pilgrims who visited the sanctuary. There are 24 bull sarcophagi in accessible galleries made of granite, basalt or limestone, mostly uninscribed. They are very large, 3.4 m high. The only listed ones are those of Am.asis (26 Dyn.), Cambyses (27 Dyn.) and Khababash (30 Dyn.), the last native king of Egypt. Mariette found most of them robbed, only a few containing even the bones of the sacred bulls. It would appear that the bulls had been eaten to obtain merit, certainly under Khacem waset, high-priest of Ptah at Memphis, son of Ramesses II, who was buried amidst them. One sarcophagus was intact and the jewellery from here is now in the Louvre. Further Nw, to the N of the site Mariette's House, is the 5 byn. Mastaba of Ti, overseer of the sun temples of Neferikare and Nyuserre, also discovered by Mariette. It consists of four rooms, a columned court; with a shaft leading to the burial chamber (2), a long corridor (4), a small narrowroom off this (3), and a rectangular pillared hall (5), off which opens a serdab (6), or closed corridor containing statues of the deceased (a replica, priginal in EM). It has some of the finest 5 Dyn. sculptured blocks so far found. The entry is through a columned portico with Ti carved on each side with his names and titles (1). Reliefs in the courtyardshow some fine bird scenes (pigeons, cranes, storks) while in the inner chamber are offering scenes, hunting in the marshes, craftsmen atJNork and offering-bearers from Ti's estate. This mastaba is noted for its scenes of agricultural life. 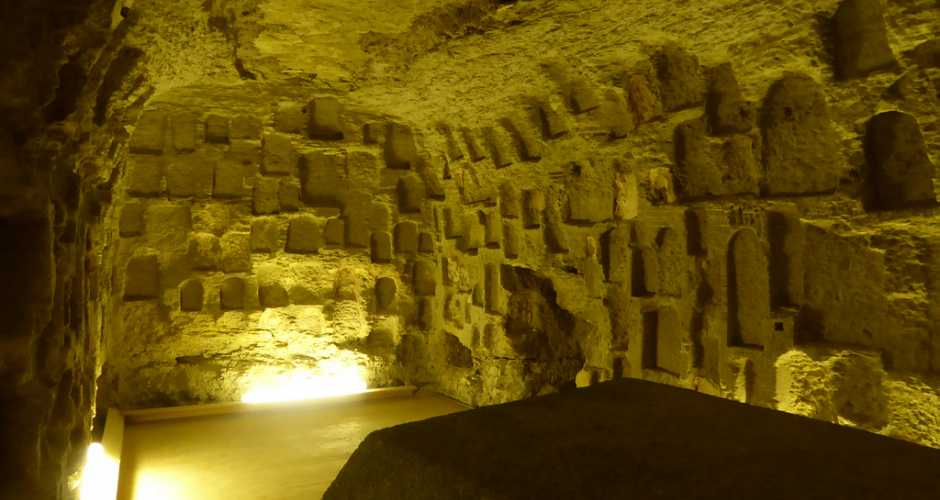 At some point, the pressure inside the box will overcome the lid weight and pop it open, releasing the gas. However, when the Serapeum was rediscovered in 1850, a few sketches were made of the interior at that time or shortly after. The following image is one of those sketches. One interesting aspect that cannot be missed in this picture is the stack of stones piled on top of the sarcophagus’ lid. It appears someone may have used blocks to counter the pressure inside the box with additional weight mounted on the lid, essentially extending the pressure of the quartz crystals.

One other point to make here is that if someone opened the lid of the Serapeum sarcophagi millennia later, most likely that person would see only what the yeast did not consume before drying out. That would be bull bones, which is exactly what Mariette found in the Serapeum when it was discovered in 1850.

Many who have visited the Serapeum since it was opened may have noticed that no soot is present on the ceiling and the walls. Upon making note of this, one cannot help but wonder how all the work was completed underground in complete darkness. Giving this some thought, I do not think the place would have been dark at all. The effect of high pressure stress on granite material and luminescence caused by that stress was analyzed by Kato, Mitsui, and Yanagidani in 2010.

In the study, a slab of granite was selected and stressed with high pressure to the point that light began to glow on the stone’s surface. The image below shows the experimental results from that study. As analyzed in the paper, granite under stress builds voltage potential on its surface. If the voltage is high enough, it ionizes the air around the surface, creating a glow.

As the pressure built in the granite boxes of the Serapeum, I do not think the grand gallery would have been dark. However, it is very unlikely that builders went to the effort of moving so much weight around just to light the hall of the grand gallery. There has to be a more pragmatic reason. Let’s consider how the electric charges could have been utilized in ancient Egypt. 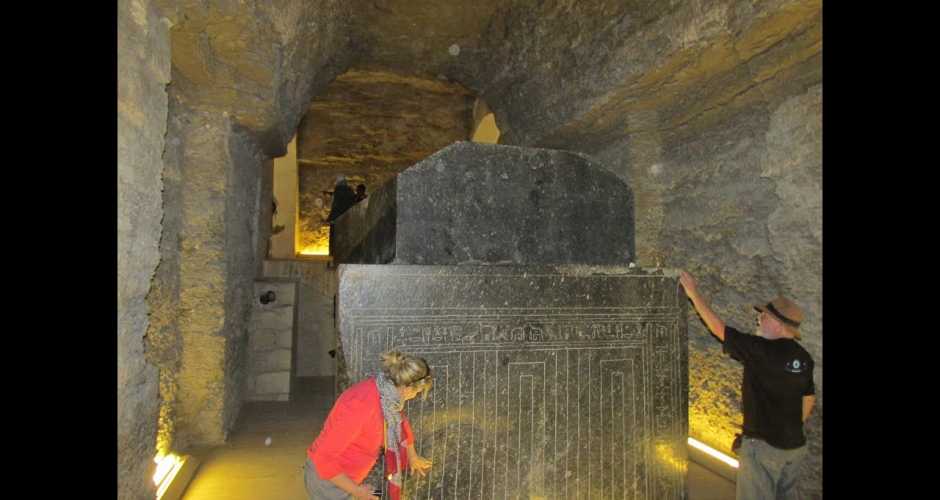