The Mastaba of Ti was discovered by Auguste Mariette in 1865. This grand and detailed private tomb is not only Old Kingdom art at its best but also one of our main sources of knowledge about life in Old Kingdom Egypt. Its owner, Ti, was overseer of the Abu Sir pyramids and sun temples (among other things) during the 5th dynasty. In fact, the superb quality of his tomb is in keeping with his nickname, Ti the Rich.

A life-size statue of the deceased stands in the tomb’s offering hall (the original is in Cairo's Egyptian Museum). Ti’s wife, Neferhetpes, was priestess and ‘royal acquaintance’. Together with their two sons, Demedj (overseer of the duck pond) and Ti (inspector of royal manicurists), the couple appears throughout the tomb alongside detailed scenes of daily life. As men and women are seen working on the land, preparing food, fishing, building boats, dancing, trading and avoiding crocodiles, their images are accompanied by chattering hieroglyphic dialogue, all no doubt familiar to Ti during his career as a royal overseer: ‘Hurry up, the herdsman’s coming’, ‘Don’t make so much noise!’, ‘Pay up – it’s cheap!’. 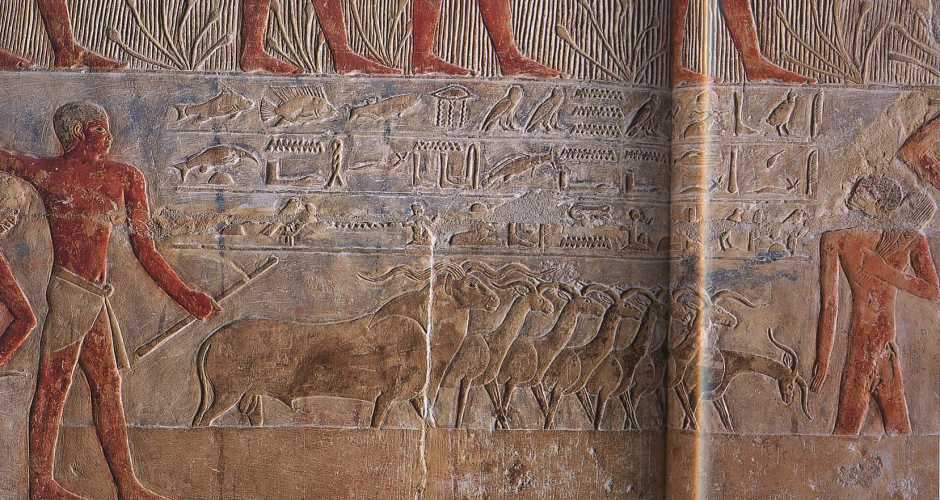 Mastaba of Ti, overseer of the sun temples of Neferikare and Nyuserre, also discovered by Mariette. It consists of four rooms, a columned court; with a shaft leading to the burial chamber (2), a long corridor (4), a small narrowroom off this (3), and a rectangular pillared hall (5), off which opens a serdab (6), or closed corridor containing statues of the deceased (a replica, priginal in EM). It has some of the finest 5 Dyn. sculptured blocks so far found. The entry is through a columned portico with Ti carved on each side with his names and titles (1). Reliefs in the courtyardshow some fine bird scenes (pigeons, cranes, storks) while in the inner chamber are offering scenes, hunting in the marshes, craftsmen atJNork and offering-bearers from Ti's estate. This mastaba is noted for its scenes of agricultural life. 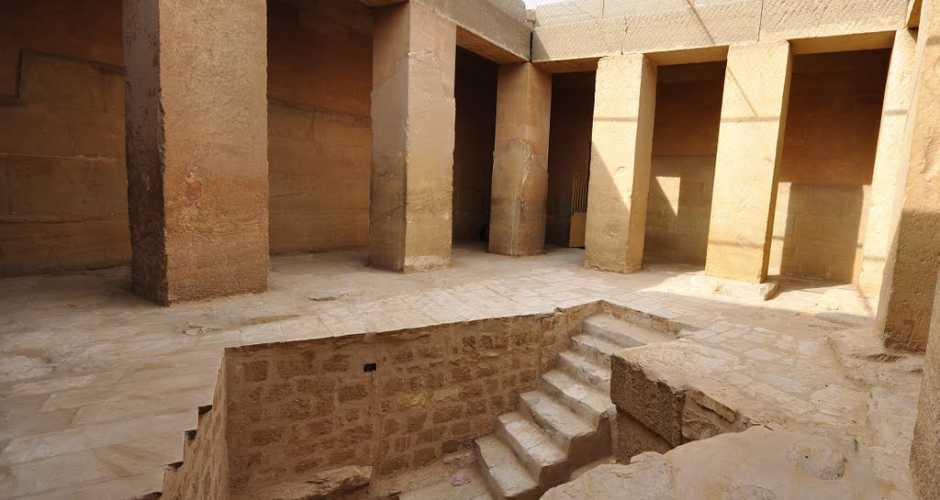 As with other tombs dating to this period, the entrance was via a portico on the northern side. This leads into a huge columned courtyard with twelve square pillars and has a burial shaft (uninscribed) in the centre where Ti’s empty sarcophagus was found. Unfortunately little exists today of the courtyard decoration, but on the north-east corner there is an aperture into the first serdab (statue chamber). Reliefs remaining in the courtyard include Ti in agricultural scenes and scenes of daily life. At the south-west corner of the courtyard there is a false door stela of his son, Demedji.

A narrow decorated corridor leads to two rooms and a false door of Ti’s wife, Neferhetpes, who was a Priestess of Neith and Hathor, can be seen on the right-hand side of the passage. Further along on the right-hand side is a long narrow chamber which is decorated with colourful reliefs of food preparation, including cooking and brewing, and pottery production, as well as scribes recording the activities. 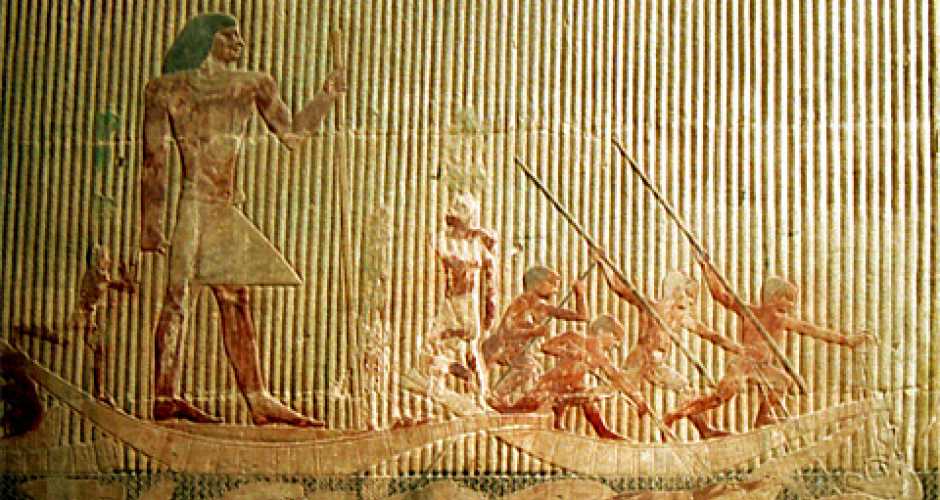 The second and larger of the two chambers, at the end of the corridor, is an offering hall, with a roof supported by two square pillars and has the most beautiful reliefs of the tomb. Above the door there are musicians and dancers while on the left-hand (east) wall the tomb owner watches agricultural activities and there are scenes of boat-building.

The southern wall has three restored apertures through which the serdab statue can be viewed. The serdab now holds a replica of the original life-sized statue (in Cairo Museum) – Ti would have communicated with the world of the living and witnessed his ritual offerings through these apertures. The wall between the spy-holes depicts scenes of Ti inspecting viticulture and bird-catching. There are also many interesting reliefs showing various industries, including carpentry, sculpture and metal-working.

The western wall has two false doors, one of which has an alabaster offering table in front of it. This stela of Ti is at the northern end of the wall has a double jamb depicting four standing images of the deceased.

The main portion of the northern wall of the offering hall is dominated by a beautiful relief of Ti standing on a papyrus boat presiding over a hippopotamus hunt. Papyrus stands erect behind the boat which floats on a swamp full of different types of fish, hippopotomi and a crocodile. Ti is depicted with a dwarf and pet and there are scenes of marshland industries such as gathering papyrus and fishing.

The mastaba of Ti is usually open to visitors. Photography is no longer allowed inside any of the tombs. 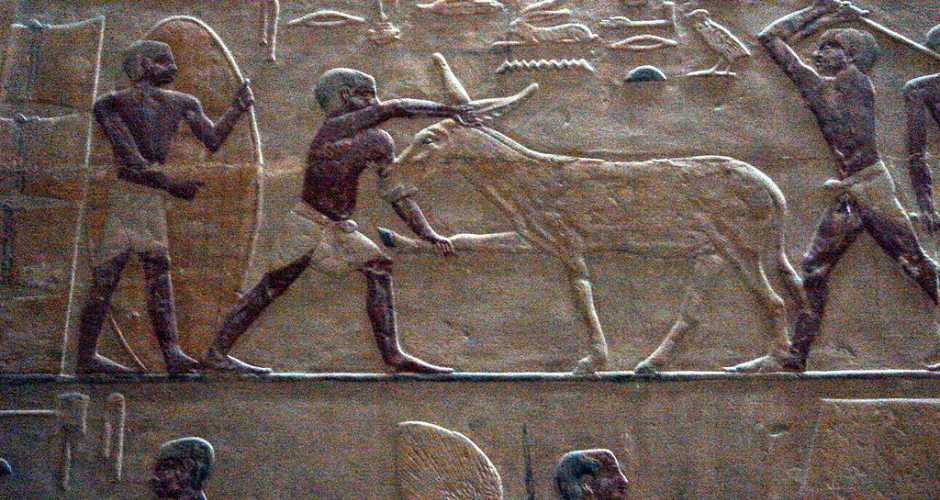