The Temple Of Medinet Habu

Medinet Habu is the name which has been given to the ancient Mortuary Temple of Ramesses III which is located on the West Bank in Luxor. The area where it stands is also called Medinet Habu, and for this reason, many people refer to the temple as “Medinat” Habu. The temple dates back to the New Kingdom period, and its most famous for its vast amount of well preserved reliefs and massive statues of Ramesses III. 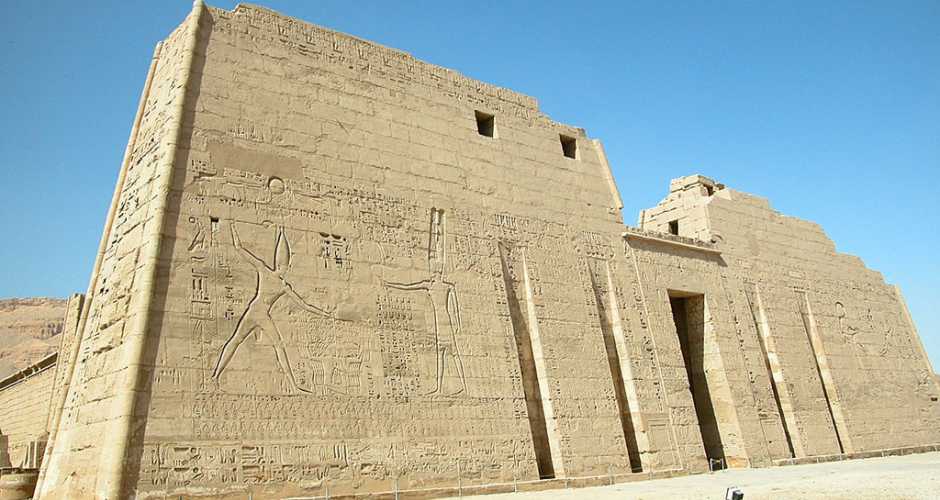 This building consists of a huge gate in the shape of a Syrian fort and is decorated with battle scenes depicting the king's wars in Syria. Through the gate to the right is a shrine dating back to the 18th Dynasty. There is also a wide-open court that leads to a huge pylon, with both towers decorated in battle scenes. On one tower the king, wearing the red crown with his "Ka" or "double", smiting his enemies in front of Re-Horakhty. On the other tower, the king is represented with the red crown of Lower Egypt, smiting his enemies in front of the god Amon Ra.

One of the most wonderful scenes engraved on the back of the southern tower is the oxen hunt. It depicts Ramses III, leading his chariot and hunting wild oxen. Here you will notice that the sculptor was skilled in showing the pain of the wounded animals. 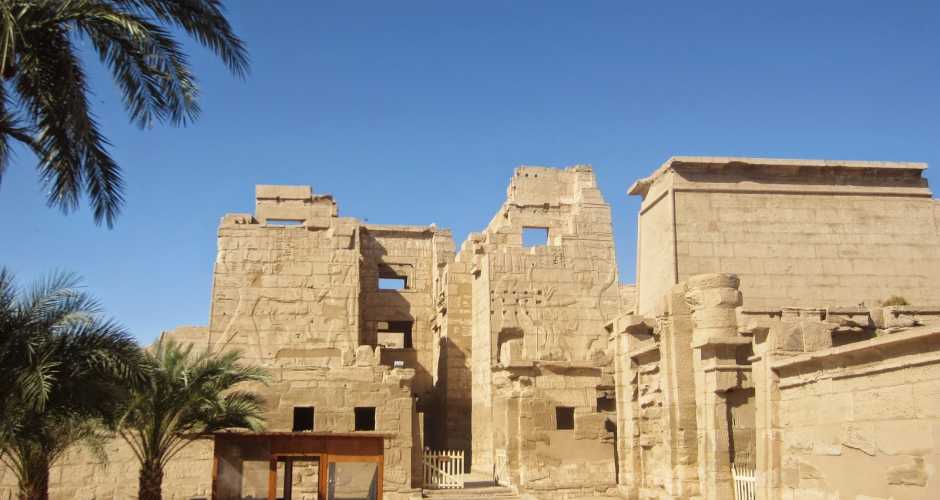 Visitors to Medinet Habu typically enter the site via a giant gateway that has two huge columns on either side. After passing through the gateway one can see the ruins of Ramesses III royal palace, and one really needs to spend some time taking in the sight of these ruins in order to fully appreciate the wealth of royalty during the New Kingdom era.

The 210 by 300 meter temple precinct is home to roughly 7,000 square meters of well preserved reliefs. Many of these show depictions relating the defeat of the Sea Peoples during the reign of Ramesses III. Others depict scenes relating to various religious rituals and ceremonies, all of which are among the best preserved reliefs ever found.

Although the complex is most famous for the funerary temple built by Ramses III, Hatshepsut and Tuthmosis III also constructed buildings here. They were later added to and altered by a succession of rulers through to the Ptolemies. When the pagan cults were banned, it became an important Christian centre, and was still inhabited as late as the 9th century AD, when a plague was thought to have decimated the town. You can still see the mud-brick remains of the medieval town that gave the site its name (medina means ‘town’ or ‘city’) on top of the enclosure walls.The original Temple of Amun, built by Hatshepsut and Tuthmosis III, was later completely overshadowed by the enormous Funerary Temple of Ramses III, the dominant feature of Medinat Habu. But a chapel from the Hatshepsut period still stands on the right after you have passed the outer gates. 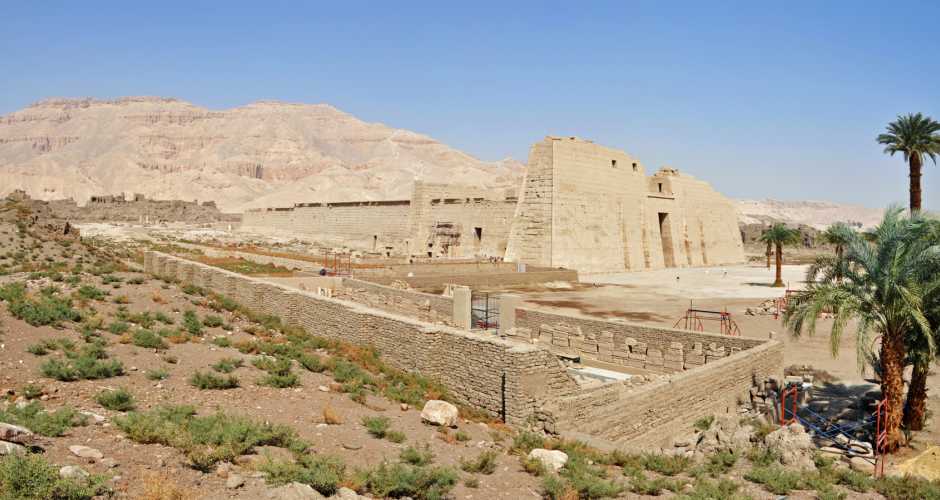 The 1st open court measures 42m long by 33m wide. Its walls are decorated with battle scenes depicting war against the Syrians and the Libyans. The 2nd courtyard (42m long by 38m wide) was converted into a basilica during the early Christian times, but there are still scenes representing religious ceremonies, especially the festival of the gods Sokker (also spelled Sokar) and Min. Other scenes represent the king, with the priests, making offerings to various deities.

The main temple is the great memorial temple of Ramesses III, the best preserved of all mortuary temples of Thebes. It is called the Mansion of Millions of Years of User-Maat-Re Meriamun, the throne name of Ramesses III, "United with Eternity in the Possession of Amun in Western Thebes." It contains more than 75,350 sq ft of decorated surfaces across its walls, The temple precinct measures about 700 feet by 1000 feet and was entered by two stone gates in the mud-brick enclosure wall on both the eastern and western sides. The western gate was destroyed when the temple was besieged during conflict in the reign of Ramesses XI. The eastern entrance was fronted by a quay, at which the boats that came in via the canals could moor. The processional way led first between two porters lodges that were set into a low stone rampart, built in front of the main enclosure wall, and then into the precinct. 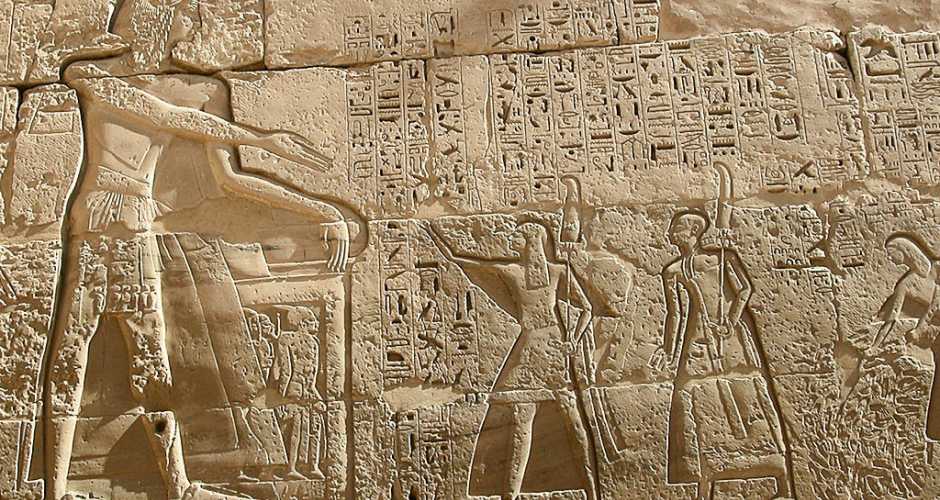 The rampart itself was a large gateway of distinctive design modeled after a western Asiatic migdol or fortress. Fronted by guard-houses, the gateway sides are decorated with images of the king trampling enemies of Egypt, and sculpted figures of the monarch standing atop the heads of captives project from the walls. A large relief representation of the god Ptah was here, having the power to transmit the prayers of those unable to enter the temple to the great god Amun within.

The upper rooms of the gate-house functioned as a kind of royal retreat or harem, its walls graced with representations of the king relaxing with young women. Perhaps it was here that the attempted assassination of Ramesses III took place.

The temple itself is a slightly smaller copy of the Ramesseum built by Ramesses II. Its massive outer pylons are the most imposing of any temple in Egypt, and are decorated with colossal images of the king destroying captured enemies before the gods. The temples outer walls also depict important battle and victory scenes over the Libyans and Sea Peoples. These scenes are continued into the first court. 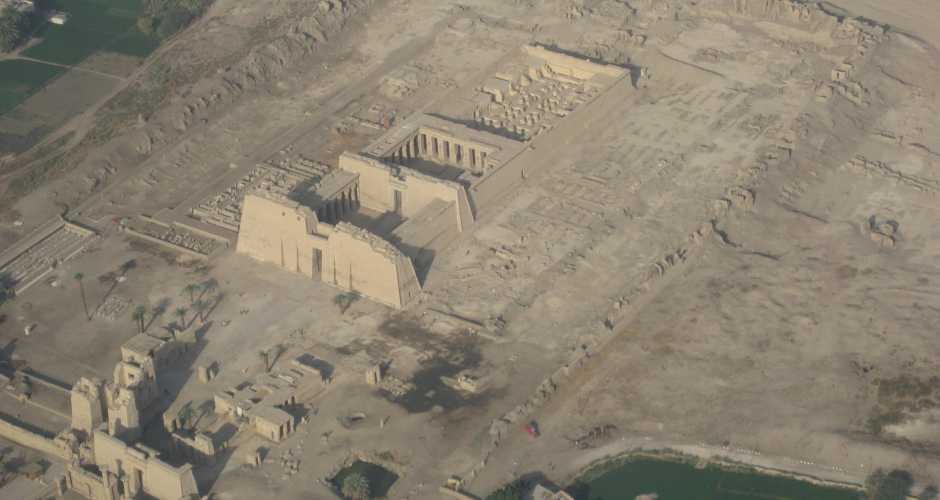 On the northern side of this court were large statues of the king as Osiris, and on the south a columned portico with the window of appearances in which the king stood or sat during formal ceremonies and festivities. The large statues of the second court were destroyed in the early Christian era when the area was converted into a church. Relief scenes here still in good condition depict rituals connected with the god Min, and on the rear wall of the portico, a procession of the kings numerous sons and daughters.

The second court is devoted to scenes of religious processions, notably those of Min and Sokar. Despite the generally good state of preservation of the temple, the Hypostyle Hall has suffered greatly, the columns being reduced to a small fraction of their original height. However, in the southwest corner is a treasury building with scenes depicting some of the temple equipment. The weighing of gold, depictions of sacks of gold, and precious stones also appear on the walls. Other temple valuables were probably kept in a better-concealed building immediately in front of the north wall of the sanctuary.

Off to the left of the second Hypostyle Hall is the funerary chamber of Ramesses III, with the god Thoth shown inscribing the kings name on the sacred tree of Heliopolis.

The focus of the main axis of the temple is the sanctuary of Amun. It was once finished in electrum with a doorway of gold and the doors themselves of copper inlaid with precious stones. Behind the sanctuary lies a false door for Amun-Ra united with eternity, namely, the divine form of Ramesses III.

On the southeastern side of the temple are the remains of a royal palace, which was probably much smaller than the kings main residence, serving as a spiritual palace as well as the occasional royal visits. It was originally decorated with glazed tiles, and its bathrooms were lined with limestone to protect the mud-brick. From the palace, the king could enter the first court, or peruse it from a window of appearances on its southern side.

To the right of the complex entrance stands the earliest section of the complex, the so-called "Small Temple", founded in the 18th Dynasty, and repeatedly expanded and usurped under later dynasties. It stood on one of the most sacred spots in all Egypt, the primeval hill which first rose out of the receding waters of Chaos. An inscription describes it as the burial place of the four primal pairs of gods.

The core of this temple was begun by Hatshepsut and Tuthmosis III, but her name was later replaced by those of Tuthmosis I and II. The structure was incorporated into Ramesses temple complex and eclipsed by the construction of the mortuary temple. Its entrance was later replaced by a pylon of the Nubian King Shabaka and then usurped by his nephew Taharqa. A small fronting gateway was built during the 26th Dynasty and usurped during the 29th by Nectanebo I. To the north of this Small Temple are the sacred lake and the so-called Nilometer, which is actually a well with a passage leading down to groundwater level.

Inside and to the left of the eastern gateway are a group of chapel-tombs belonging to the 25th and 26th Dynasties Gods Wives of Amun. They ruled Upper Egypt nominally at that time. On the lintels above the entrances to these chapels may still be seen the "Appeal to the Living", which encouraged passers-by to repeat the Offering Formula for the kas of these powerful women.

Because of its strong fortifications, Medinet Habu became a refuge in chaotic times. The workmen of Deir el-Medina moved there during the late 20th Dynasty, and the remains of the house of one Butehamun, a village scribe, can still be seen there at the western end.

During the Christian era, the entire area was covered by the Coptic town of Djeme and even the great temple itself was filled with dwellings and one court used as a church.