In the first years of the reign of Teti, first king of the 6th Dynasty (c. 2321-2290 B.C.), an official named Kagemni-Memi was appointed to the rank of Chief Justice and Vizier, the highest post in the bureaucracy of Old Kingdom Egypt.Teti had good reason to trust his new vizier because Kagemni was a son-in-law of the king through marriage to "The king's daughter, his beloved, [issue] of his body, Nebty-nebu-khet"Thanks to his new position and his royal connections, Kagemni was able to organise in the necropolis of Saqqara the construction of a sumptuous tomb for himself, situated close to his king's pyramid. For it, he would have the best workshops and workers of the country, which explains the extraordinary quality of the decor which decorates the walls of his mastaba. 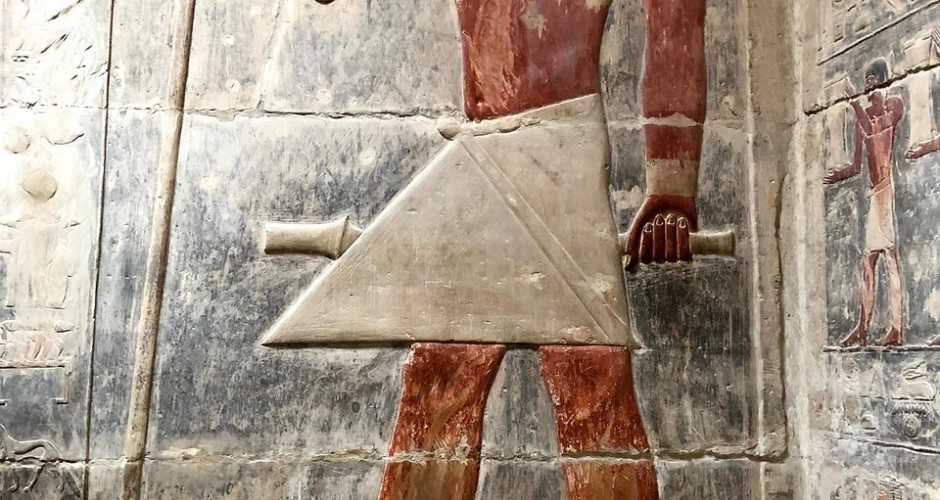 The monument is located to the north of the pyramid of Pharaoh Teti, and to the northeast of the step pyramid of Djoser (3rd Dynasty). It testifies to the power reached by the highest commissioners at the time where the decline of royal authority began. This decadence will be more obvious in the following generation, as will be seen in the magnificent mastaba of the successor of Kagemni, Mereruka 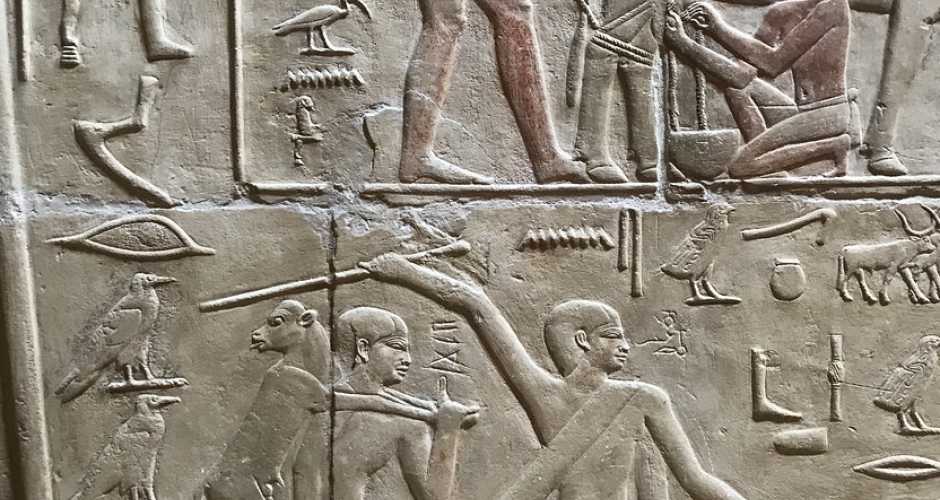 The mastaba was discovered in 1843 by Richard Lepsius. It had to wait until 1905 before von Bissing would begin his publication of rooms IV to VIII, which wasn't completed until 1911. Even though Firth re-excavated the monument in the year 1925, he didn't publish a detailed report of rooms I to III, which thus remain (academically) unpublished to date.
The lower registers of the walls of the mastaba are well preserved, having preserved in many places the vibrant colours, alas the upper registers are nearly all lost, except toward the rear of the tomb. The monument has never been published in its entirety. 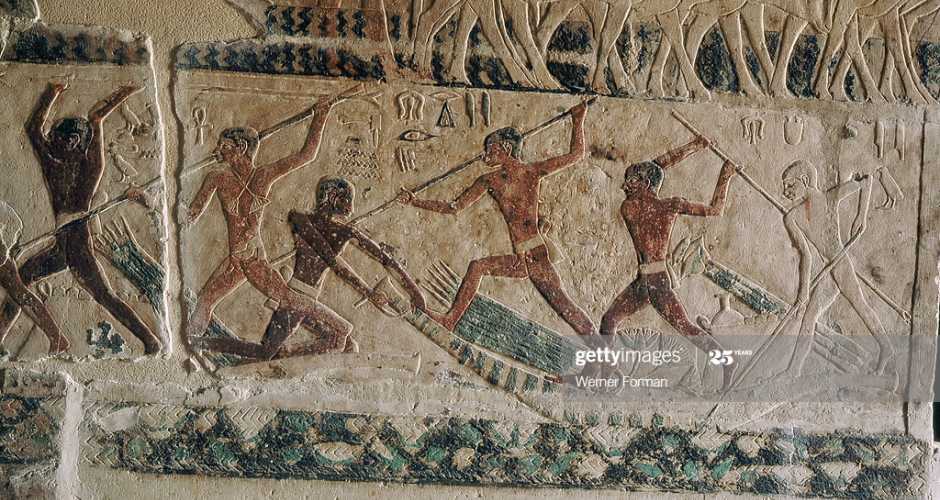 The tomb is a mastaba type with 32 metre long sides. Within this solid structure, the various chambers take the form of an "L" shape, located primarily towards the south-east corner; a large portion therefore being a solid structure. The southern arm of the L (along the entry axis) is oriented east-west, the other arm is south-north.The plan (seen left) gives a good idea of the complexity of this vast building, of which some rooms are still unpublished. It also shows that the lack of use of such valuable space.The mastaba was created in limestone, local limestone for the main body and for the door and its doorposts, white Turah limestone for the rest and notably the external facing. The external face of the building must have presented a white brightness when the limestone had not yet been damaged by time. In any case, it was torn off the building a long time ago.The blocks used measure up to two meters in length with a width and thickness not exceeding around fifty centimetres. The blocks were very carefully cut, so that the mortared joints are sometimes almost invisible.

The entry is through a doorway on the left-hand side of the front facade, into a small-sized first room. To the right is located a long room (II) which leads, at its rear, to a staircase which gave access to the roof.

From room I, a small opening gives access to room III, which has three central pillars along its long axis. At its western extremity an opening was created to a set of 5 storerooms. A new stepped doorway, to the right (north) on entering room III, leads to room IV and beyond.To the west of room IV, and buried in the masonry with no openings, is the serdab. In this room one usually finds a statue of the deceased, who comes out to eat the offerings. In some mastabas, an opening is preserved in the wall so that the dead can "see" what happens in his tomb, but not here. At the time of the initial excavation, the room was empty.

Room V has the curious particularity to include a bench, intended for the people who came to participate in the funeral cult.

Room VI includes a funeral shaft of a later period.

Room VII was the one intended for the offerings, since it includes at its western extremity the false stela doorway, which assures the point of contact between the world on earth and the beyond. It also includes an offering table on the floor.

Room VIII seems to have no other function than to extend further into the monument, probably to come closer of the vizier's terrestrial dwelling. In fact, it represents just an offset extension to the offering chamber. Here are preserved the most vivid colours.

In the solid structure of the masonry situated at the northwest corner of the mastaba, and therefore close to the offering room, through an opening in the roof and down through the ground, is the funerary shaft. This leads to an underground funerary structure, strictly intended for the deceased, to which no one had access after funeral ceremony. This construction takes the form of a rotated "T" shape and includes the sarcophagus of Kagemni.

To the west of the serdab and room VI (but actually located on the roof) are preserved two boat-shaped pits, which would have been intended for the barques, but which remained empty. Note that these barques were originally supposed to come solely with royal pyramids, as with the one recovered at the foot of the pyramid of Kheops, or the two boat pits belonging to the pyramid of Unas, here at Saqqara. 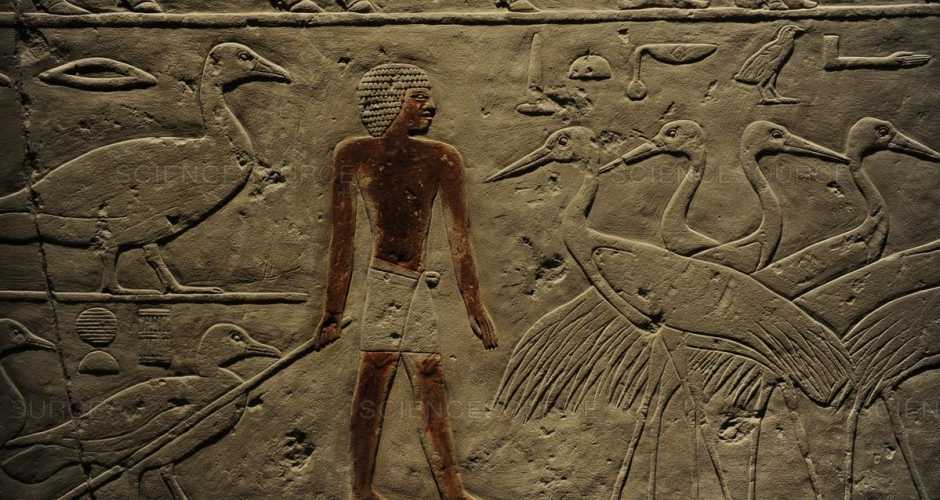