Philae Island was a rocky island in the middle of the River Nile, south of Aswan. It was called in Hieroglyphic "Apo" which means Ivory. It was also known by the Greek "Elephantine", most probably because it was an important center of trade, especially for ivory.

Built to honour the goddess Isis, this was the last temple built in the classical Egyptian style. Construction began around 690 BC, and it was one of the last outposts where the goddess was worshipped. The cult of Isis continued here until at least AD 550. The boat leaves you near the Kiosk of Nectanebo, the oldest part, and the entrance to the temple is marked by the 18m-high first pylon with reliefs of Ptolemy XII Neos Dionysos smiting enemies. 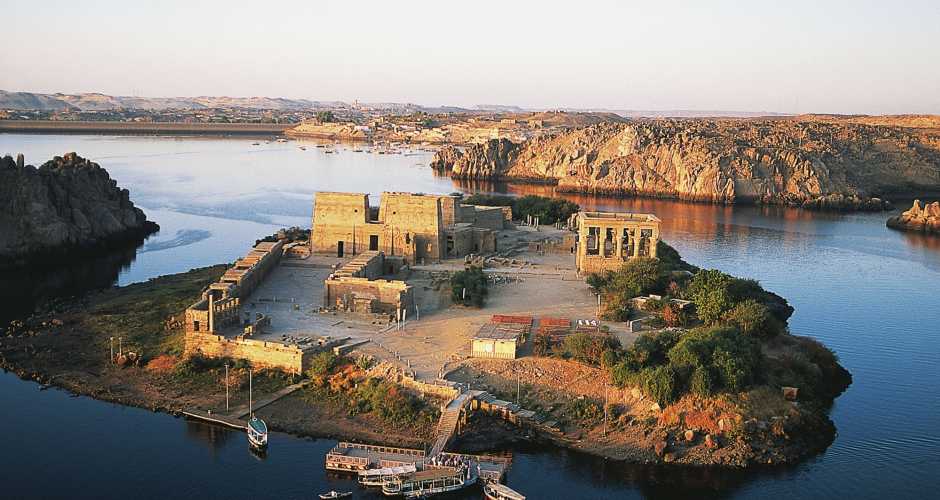 The new island was called Egilica (also called Agilika), and it was completely reshaped to imitate Philae Island as closely as possible. Firstly, a cofferdam was built around the temple and the water was drained. Next, the temple was dismantled and transferred, stone by stone, from the submerged Philea Island to the redesigned Egilica Island. Each and every stone had to be numbered and then replaced, in the same position, in the new location. It was a massive, and very complicated, project taking over 9 years to be accomplished. The Temple of Philae was reopened in 1980! 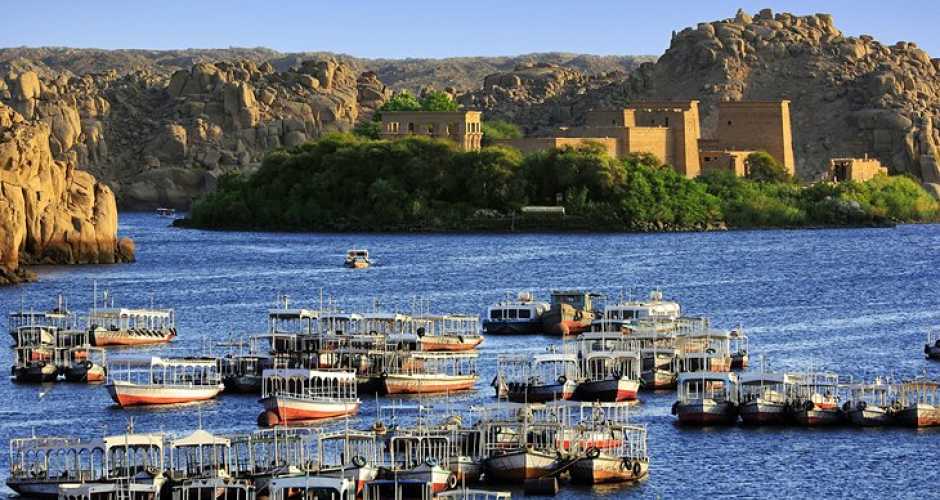 The First Pylon leads into the main temple area. Its two towers and central doorway provide a grand 18-meter-high entry that is decorated with reliefs by Nectanebo. A doorway in the western tower with reliefs by Philometor, leads directly to the Birth House. In front of the pylon there originally stood two granite obelisks erected by Euergetes II and two granite lions. Adjoining the east tower, an elegant gateway has reliefs by Ptolemy II Philadelphus (on the lintel) and the Emperor Tiberius (on the jambs). The gateway, built by Philadelphus, originally stood in a brick wall.On the front of the east tower, a huge relief depicts Ptolemy XII Neos Dionysos grasping a band of enemies by the hair and raising his club to smite them, with Isis, the falcon-headed Horus of Edfu, and Hathor on the left. Above are two reliefs of Neos Dionysos presenting the crowns of Upper and Lower Egypt to Horus and Nephthys (right) and offering incense to Isis and Harpocrates (left). 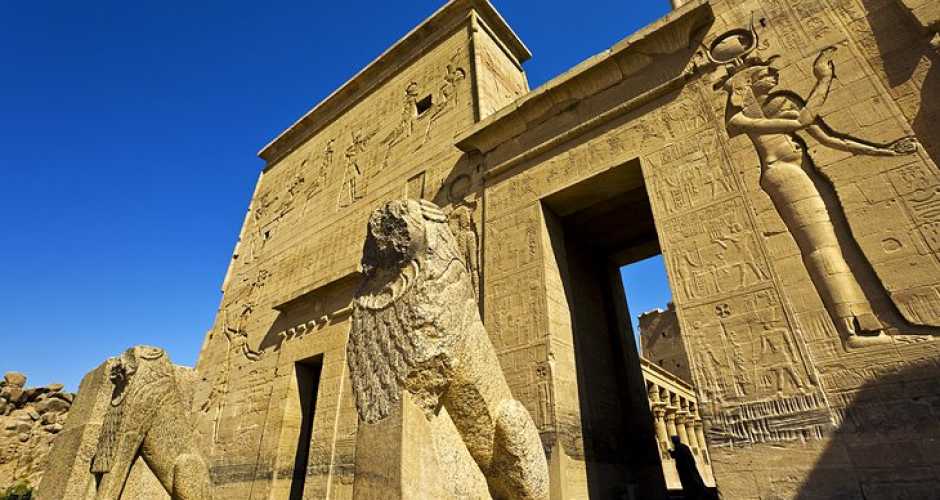 As you pass through the central doorway, look for the French inscription ("an 7 de la République") on the right, commemorating Napoleon's campaign and the pursuit of the Mamelukes by General Desaix in 1799. On either side of the Forecourt, you'll see structures fronted by colonnades. The small building to the east contained rooms for the priests, which served some scientific purpose. Look for the plant columns in its vestibule, which are notable for their elegant proportions. On the north side of the building's vestibule, a door accesses the inner passage around the temple. In the central court of the Temple of Isis, the mammisi (birth house) is dedicated to Horus, son of Isis and Osiris. Successive pharaohs reinstated their legitimacy as the mortal descendants of Horus by taking part in rituals celebrating the Isis legend and the birth of her son Horus in the marshes. 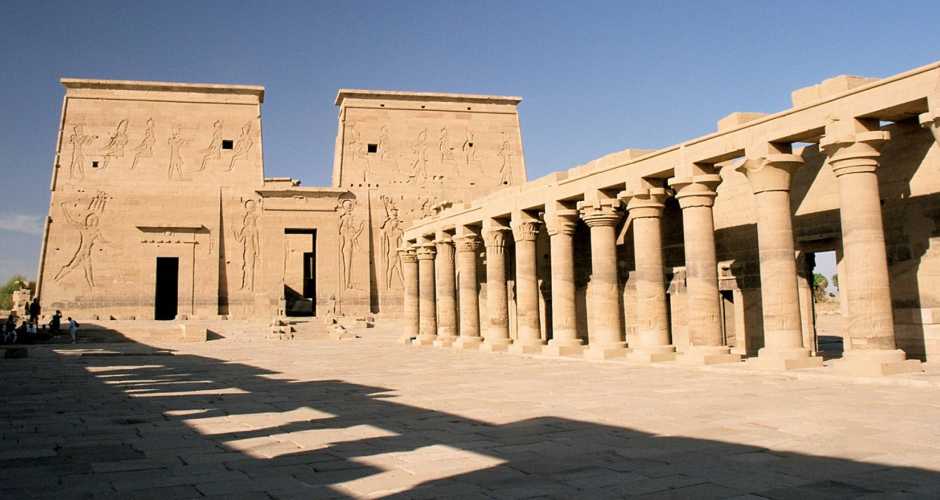 The Second Pylon provides a fittingly regal entry to the inner sanctum of the temple with a magnificent doorway 32 meters wide and 12 meters high. The reliefs on the central doorway are by Euergetes II. In front of the doorway are the foundations of a small chapel. Within the central doorway (on the right, above) are some much faded early Christian paintings.On the lower part of the doorway is a relief of a large figure of Neos Dionysos dedicating the slaughtered sacrificial animals to Horus and Hathor. Above are two small reliefs. On the right, the king is depicted presenting a garland to Horus and Nephthys and on the left, offering incense to Osiris, Isis, and Horus while pouring water on the altar. 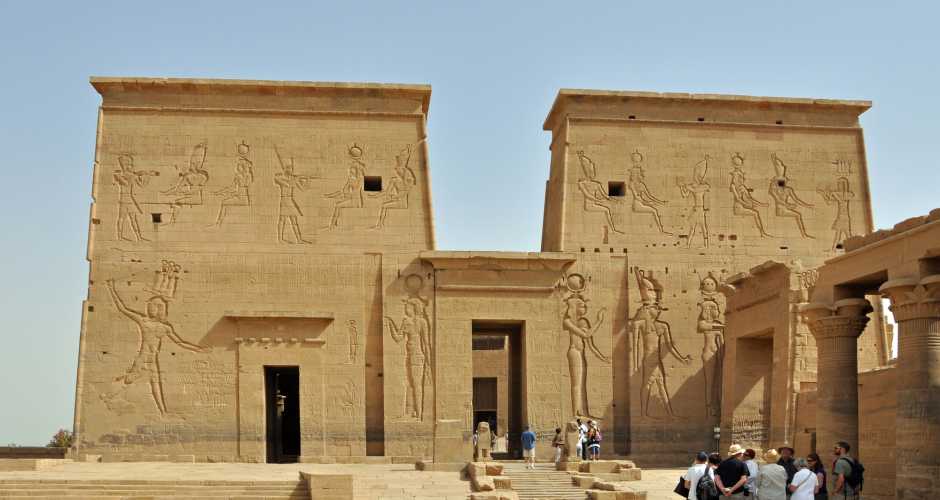 The Kiosk of Trajan

There are other monuments here, as well, including The Kiosk of Trajan, the Chapel of Osiris, The Temple of Horus, The Temple of Hathor, The Gateway of Tiberius, the Gateway of Diocletian, and the Temple of Augustus. The temples of the island were neglected, and some of them even destroyed, after the persecution of the Christians by the Roman Emperors. During the reign of the Emperor Justinian (527-565 A.D), the main Temple was converted to a church. 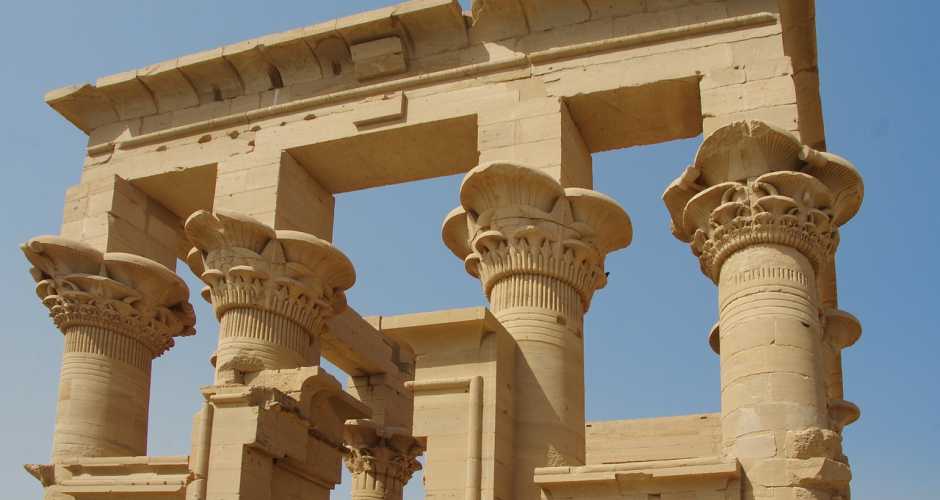 Beyond lie three vestibules, leading into the Inner Sanctuary of Isis. Two granite shrines stood here, one containing a gold statue of Isis and another containing the barque in which the statue travelled, but these were long ago moved to Florence and Paris, and only the stone pedestal for the barque remains, inscribed with the names of Ptolemy III and his wife, Berenice. Take a side door west out of the hypostyle hall to the Gate of Hadrian where there is an image of the god Hapi, sitting in a cave at the First Cataract, representing the source of the river Nile. 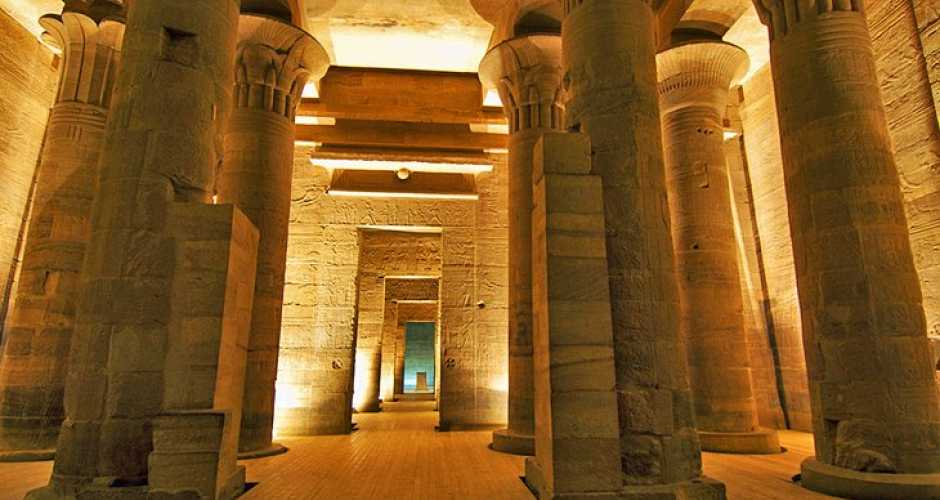 The Sanctuary: House of Isis

After passing through a number of antechambers flanked by dark side chambers, you come to the Sanctuary, lit by two small windows. The granite base here (presented by Euergetes I and his wife Berenice) would have held the sacred barque bearing the image of Isis. To the left of the first antechamber is a small room with reliefs of the king in the presence of Isis. On the west side of this room is a door leading out of the temple to arrive at the Gateway of Hadrian. 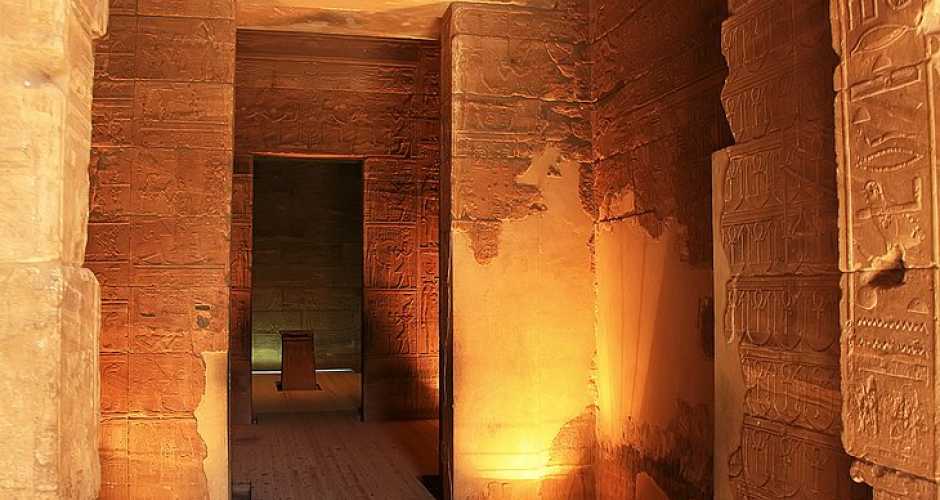 The sound and light show

Don't miss the sound and light show at night, the least cheesy of the sound and light 'extravaganzas'. On your feet, look out for the extremely creative guards who will do all in their power to get in your photos, or to point out the hieroglyphs that you can quite clearly see yourself, all for some baksheesh (tip)! 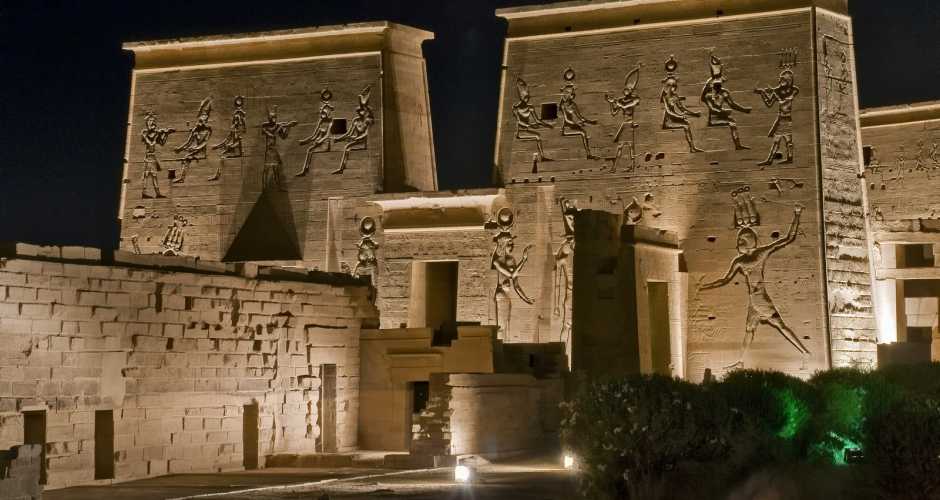