Dedicated to the god Horus of Behedet, lord of Edfu, the Temple of Horus is the most famous monument at Tell Edfu. Due to its completeness and state of preservation, it is the best example of Ptolemaic temple building in Egypt. The temple is oriented from south to north, measuring little over 140m long and occupying an area of about 7000m2. 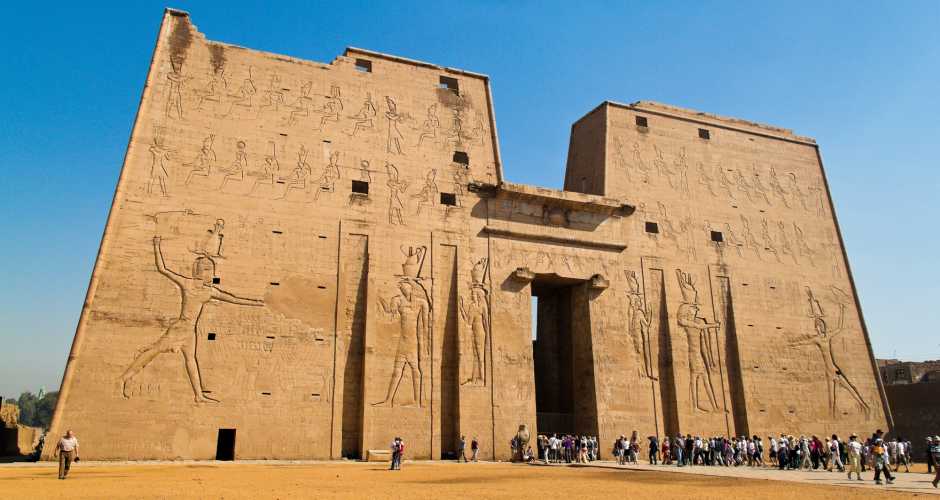 Edfu is located 60km north of Aswan. It was the 2nd Nome of Upper Egypt and the center of the cult of a triad of gods, which consisted of Horus of Behdet, Hathor, and their son, Hor-Sama-Tawy. In the old Greek documents, Edfu was known as "Apollopolis Magna" because the Greeks identified Horus with their god Apollo. Edfu flourished in ancient times. Today, the most important monument in the city of Edfu is the Temple of Horus, one of the most beautiful and preserved Temples in Egypt. Its origins likely date back to the Second Intermediate Period, but the actual Temple only dates back to Ptolemaic times. The work of construction began during the reign of Ptolemy III (about 237 BC) and was finished during the reign of Ptolemy IV. Some other additions were made by other Ptolemaic Kings and the Roman Emperor Augustus. The temple's construction, in addition to its additions, inscriptions, and relief's took about 180 years 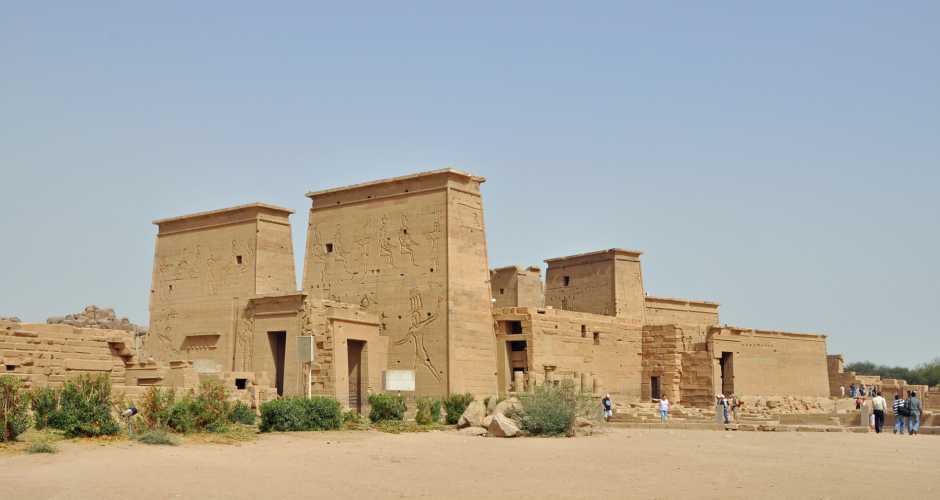 The Edfu Temple consists of traditional elements of Egyptian Temples of the New Kingdom, together with a few Greek elements, such as the mamisi (house of divine birth), which is situated to the west of the main entrance of the Temple. It consists of an entrance, a court, and chapel. The walls of the mamisi are decorated with scenes showing the story of the divine birth of Horus the child, in the presence of the goddess Hathor, the god Khenoum and other deities who were concerned with pregnancy and birth 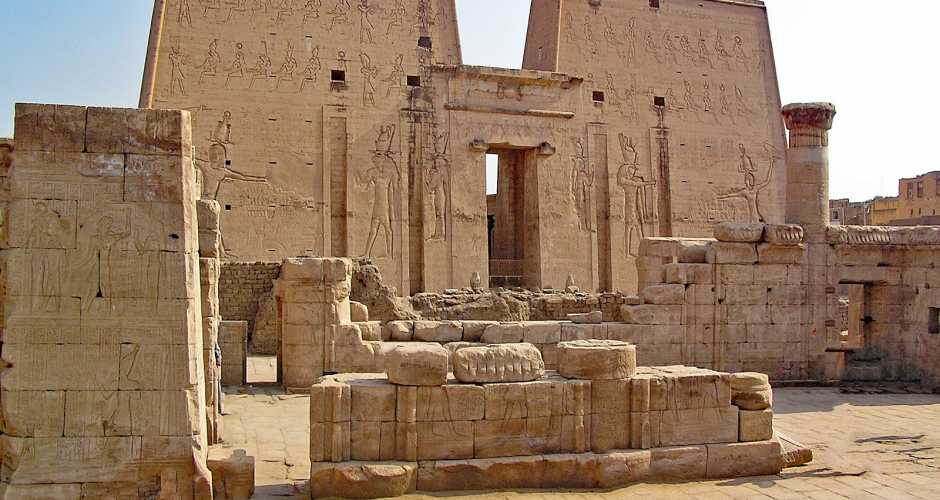 This temple has one of the best surviving pylons among temples in Egypt today. It is 37m high and decorated with battle scenes, representing King Ptolemy VIII smiting his enemies before the god Horus. Next, there is an open courtyard that contains columns with floral capitals on three sides. This court was open to the public and was known as the court of the offerings, the place where people could give their offering to the statue of the god.  Hypostyle Hall is rectangular with12 columns to support its roof. On both sides of the entrance stands a falcon-shaped statue of Horus of Behdet. This hall is also known as the Outer Hypostyle Hall. 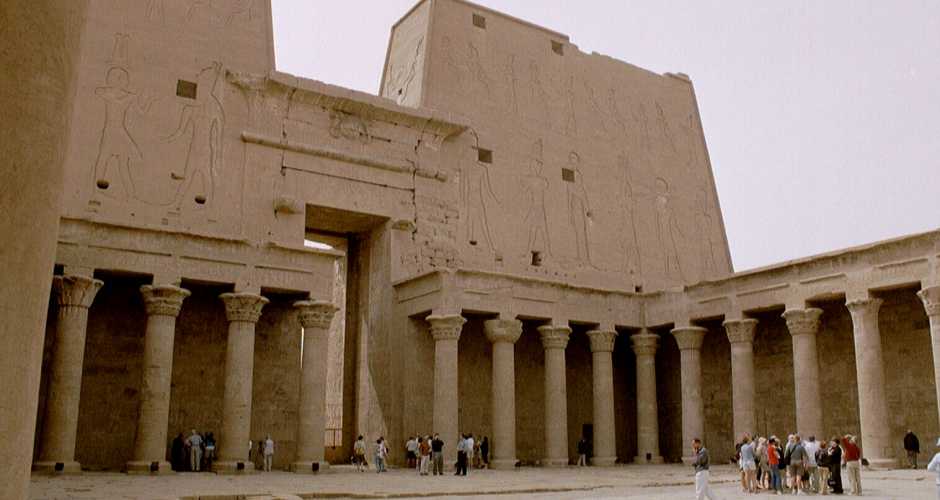 Although there are mentions of a first sanctuary at Edfu since at least the Third Dynasty, the Temple of Horus, as it currently stands, was started much later by Ptolemy III Euergetes I in 237 BCE. It was continued by Ptolemy VIII Euergetes II who, 95 years later in 142 BCE, inaugurated the temple. He also initiated work on the enclosure wall and mammisi. Ptolemy XII Neos Dionysos finalized the work on the enclosure wall, the main courtyard, and pylon. He then inaugurated the temple for the second and last time in 70 BCE. The temple was officially finished in 57 BCE with the installation of the main entrance wooden doors between the two pylons. In total, it took 180 years to complete the building and decoration of the Temple of Horus at Edfu. 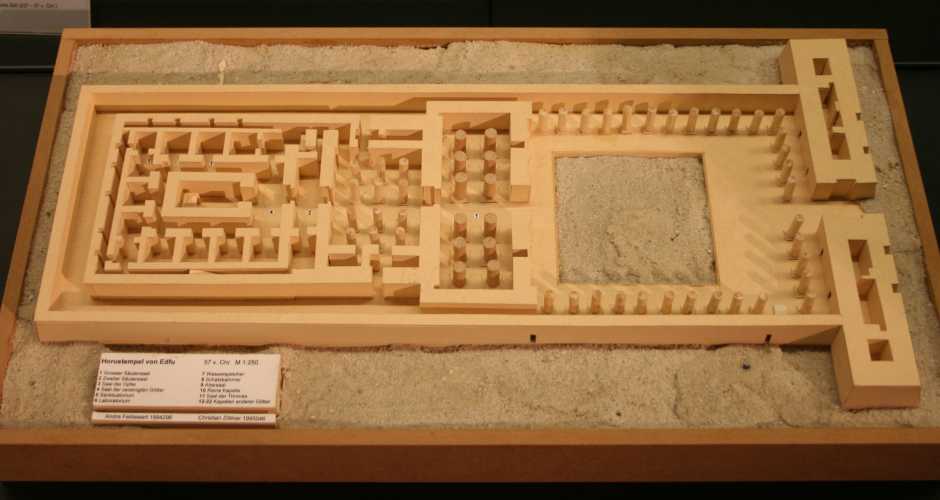 The entrance to the Temple of Horus is marked by a monumental gate with two large towers measuring approximately 36m in height. The Lebanese cedar doors which originally closed the gate were installed in 57 BCE by Ptolemy XII Neos Dionysos. The four depressions on the facade of the pylon, two on either side of the gateway, show the location of the four 40m high wooden flagpoles which would have adorned the entrance to the temple. Within the towers of the pylon are four storeys of chambers and storerooms accessed via staircases which also lead to the roof of the temple. 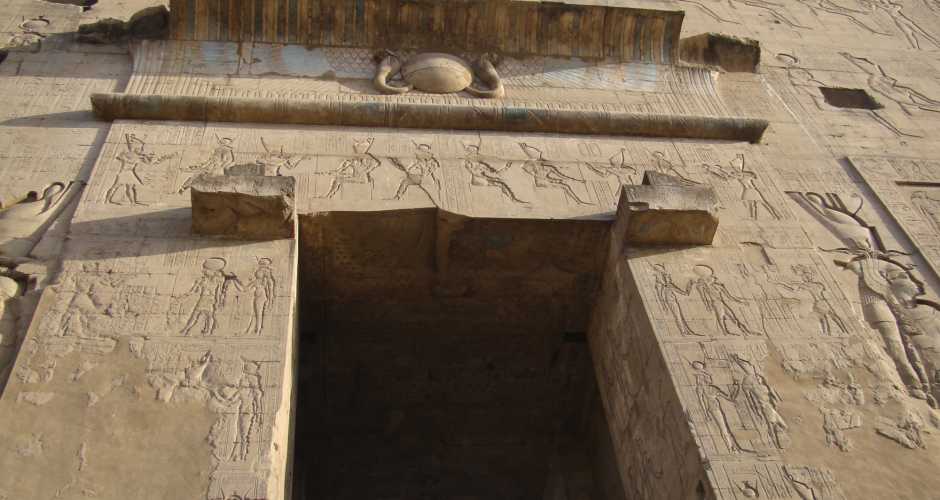 The Festival of the Living Falcon

The Festival of the Living Falcon was an annual celebration of the crowning of the sacred bird and the reestablishment of the pharaoh’s kingship and power. The ritual began with the transportation of the main statue of Horus of Behdet from the sanctuary of the Temple of Horus to the Temple of the Sacred Falcon, an outer temple likely located east of the mammisi but which no longer exists. Living sacred falcons were raised within it, and were considered to be representations of Horus and the reigning king. On this day, one of them was chosen by the statue of Horus as its rightful heir through an oracle. To make its appearance to the crowd, the falcon and the statue of Horus of Behdet were brought to the top of the monumental gateway, on the bridge between the two pylons. After its appearance, the falcon was taken back to the main temple for its coronation. Upon completion of the ceremony, the falcon and the statue of Horus of Behdet were returned to their respective temple and festivities began for the people of Edfu. 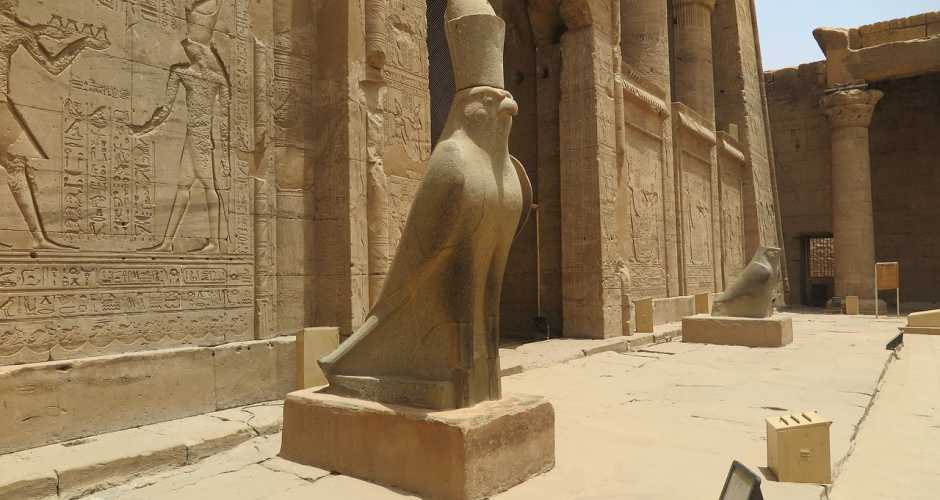 The monumental gateway of the Temple of Edfu leads to a large paved courtyard which is surrounded on three of its four sides by 32 columns. Immediately to the right and left are scenes carved on the forecourt walls concerning the Feast of the Joyous Union, one of the most important festivals at Edfu. This festival celebrated the sacred marriage between Horus of Edfu and Hathor of Dendera. The majority of the rites took place outside the temple, allowing the wider population to witness them. The 15-day festival began with the arrival of the statue of the goddess Hathor, who had left Dendera by boat 14 days earlier. The celebrations included feasting and drinking, visits to the burial mounds of the Ancestors across the desert, and various rites carried out within the confines of the temples. On the 14th day, Hathor left the temple of Edfu in great pomp, and travelled back to her own temple at Dendera. 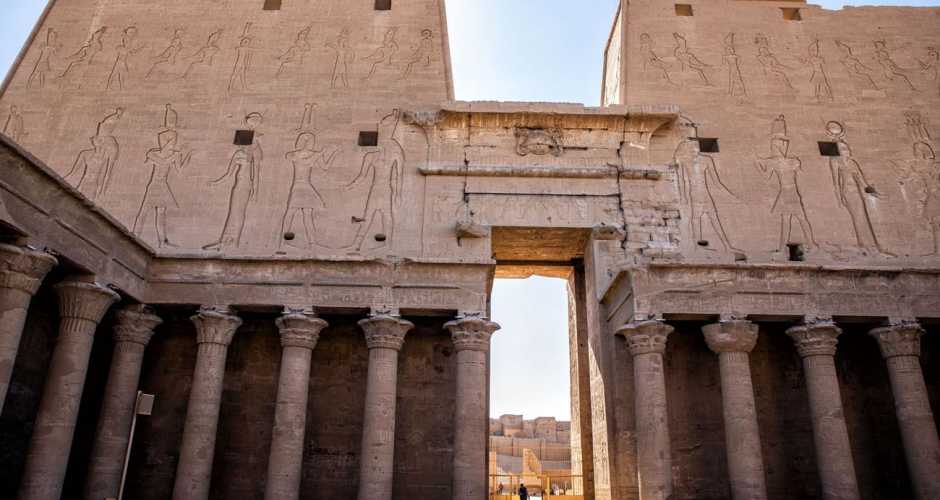 The smaller of the two hypostyle halls lies directly beyond the larger. It marks the beginning of the naos, the most sacred area of the temple. From this point on, the level of the floor slightly raises while the ceiling lowers, leading to the focal point of the naos, the sanctuary. The smaller hypostyle hall has three side rooms. To the left is the Room of the Nile which was used to store the water necessary for purification, while the Laboratory was used to make the unguents and perfume used during the rituals. To the right was the Treasury which contained objects and amulets made of precious metals and stones used to adorn the statues of the gods. 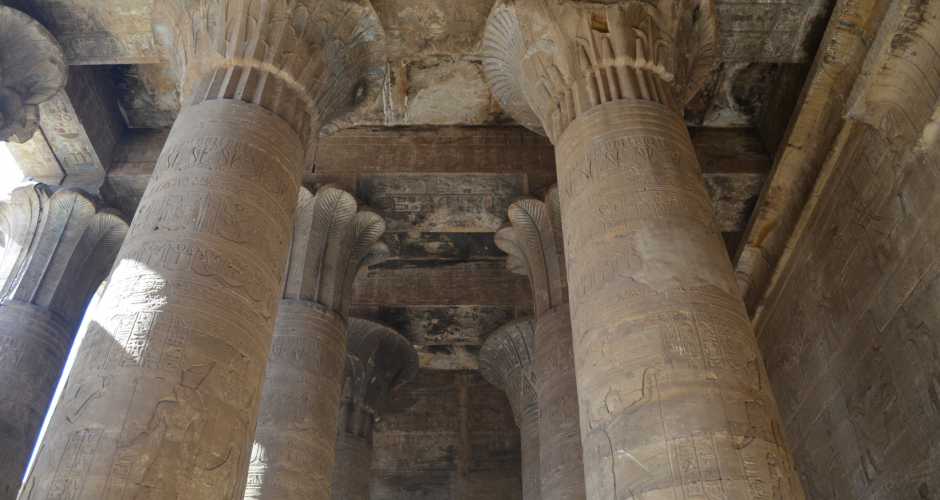 The Court of Offerings

This narrow room was used for the burning of food and oil offerings for the god, who would be nourished through their aroma and smoke. The wall’s decorations of offering and purification scenes contribute to the eternal sustenance of the deity.

This room acted as a buffer zone before accessing the most sacred portions of the temple: the sanctuary and its surrounding chapels. The vestibule, also called transversal hall, is flanked on either side by two staircases providing access to the roof. The roof was used for several ceremonies in the past.

The sanctuary was the most sacred and important portion of the temple. It contained the sacred barks of Horus and Hathor, used in processions, as well as the permanent shrine for the sacred image of the god which was likely a wooden falcon statue. The shrine, made of black granite, is located at the rear of the sanctuary and is one of the few remnants of an older temple of Horus. The shrine was made by Nectanebo II (360-343 BCE), around a hundred year before the beginning of the construction of the current temple of Horus. The door frame of the sanctuary is inscribed with hymns which were sung in the morning before opening the bronze doors of the sanctuary in order to wake up Horus and the other deities sleeping in their chapels. 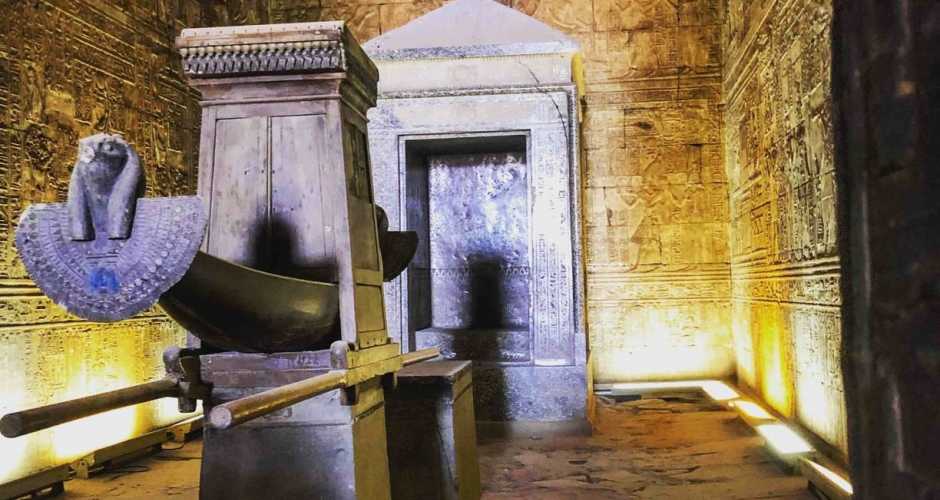