the mastaba Akhethotep and Ptahhotep

The mastaba designated D64 is located in the north-west part of the necropolis of Saqqara, to the west of the step pyramid of Djoser. It constitutes the most important element of a much vaster domestic funerary complex and was the common burial of two high commissioners from the end of the Vth Dynasty, vizier Akhethotep and his son Ptahhotep. The monument was discovered by Mariette at the time of the excavations which he had undertaken in 1850. The only detailed documentation is that produced by Norman de Garis Davies, at the beginning of the 20th century, but since then the mastaba has undergone a great degree of reconstruction.
A modern ramp provides access to a courtyard area with entrances to two mastabas. Turning to the left, the entrance to D64 is located at the southern end, facing north. Immediately in front of the ramp is the mastaba of the father of Akhethotep, whose son (co-owner of D64) bears his grandfather’s name and for this reason he is usually referred to as Ptahhotep II. The Tomb of the elder Ptahhotep was designated D62, with the entrance facing east. 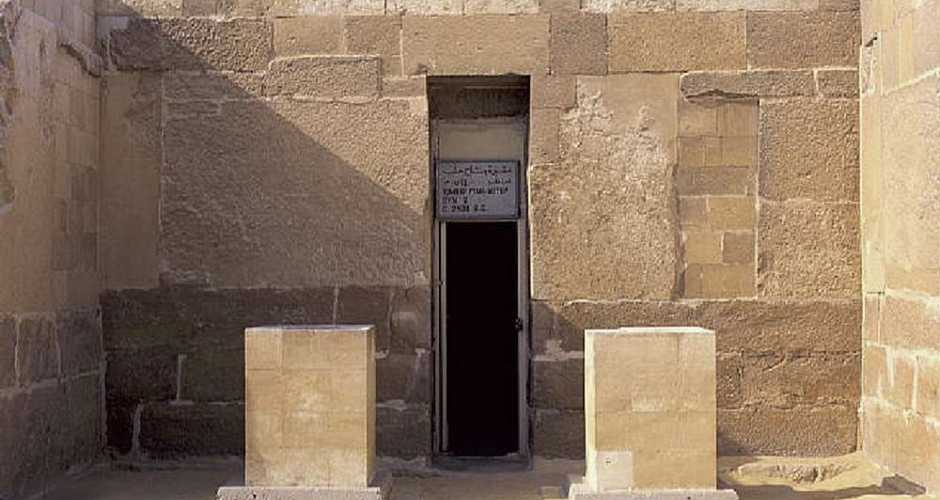 Although the mastaba D64 is named outside as the “Tomb of Ptahhotep”, this is incorrect and results from its early history, when only the chapel of Ptahhotep was open to the public.

The complex containing this mastaba is hardly visible from orbital cameras ( Google Earth view) due to everything being the same colour as the surrounding desert sand. The courtyard and the recessed entry to D64 are visible, also the approach ramp from the direction of the Djoser complex. The D64 complex also contains several other, smaller, mastabas which have not survived as well as those of D62 and D64.This page provides the general details of both the family and the mastaba as a whole.
The two following pages will describe separately the two areas of the mastaba being those areas belong to Akhethotep and then that of Ptahhotep.Personal details of the individual owners will be contained likewise. 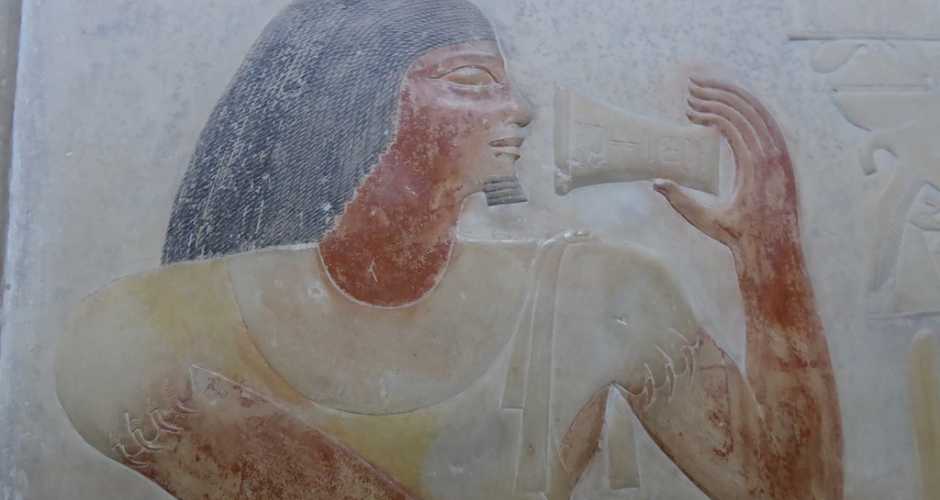 The family of these two tomb owners is dominated by their two names, those of Akhethotep and Ptahhotep. Several high officials named Ptahhotep were buried at Saqqara, at least three predate those of D64 and D62. Only those of these two mastabas can, with reasonable certainty, be shown to be related; the family therefore being as follows :Ptahhotep (D62) is the eldest, and usually referred to as Ptahhotep I.Akhethotep (D64) was the son of the above.Ptahhotep (D64) shares the mastaba with his father and is usually referred to as Phtahotep II.Akethotep and Ptahhotep, sons of Ptahhotep II, are mentioned as such in D64.The burial place of the youngest Akhethotep was almost certainly the mastaba (E17) located to the south-east of the pyramid ofDjoser,but north of the causeway ofUnas. The whereabouts of the youngest Ptahhotep is unknown.The father and son relationship between the two people of D64 was originally proposed by Norman de Garis Davies as Ptahhotep being the father. However, one year after publishing his first book on the mastaba, he reversed this in Part II of the publication, with supporting evidence. 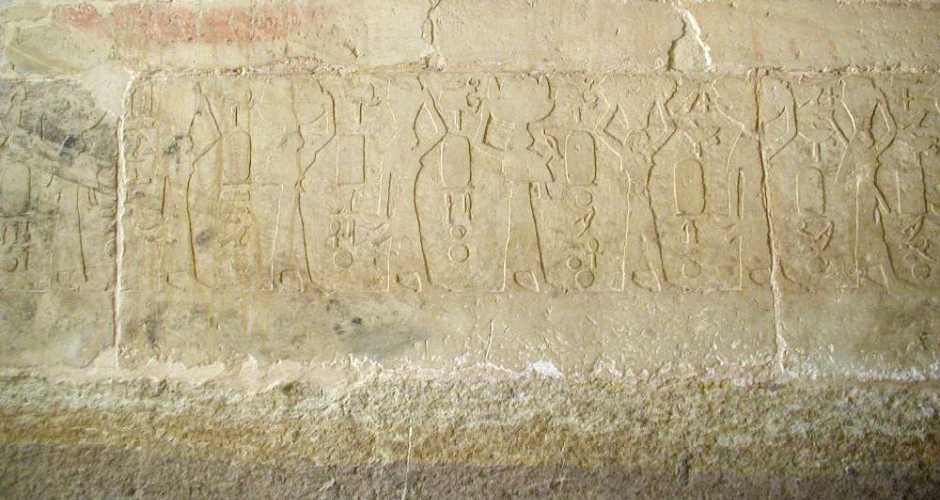 In a general manner, the mastaba (an Arabian word meaning “bench”) is often more remarkable due to the interesting content and beauty of the scenes (often in painted on sculpted bas-relief), than by its architecture, which is usually very simple. It is composed of a superstructure within which is primarily a funeral chapel (the decorated part of the monument), accessible to the living for the purpose of cult worship, and of an infrastructure including a well shaft giving access to the actual burial vault.
Mastaba D64 includes three decorated spaces: two in the name of vizier Akhethotep, the third in the name of his son Ptahhotep.
It is this last space, the chapel of Ptahhotep, with the amazing quality of its painted bas-reliefs, which easily sustain comparison with those of the mastaba of Ty, that the whole mastaba, in an incorrect manner, is called the “Tomb (or chapel) of Ptahhotep”. 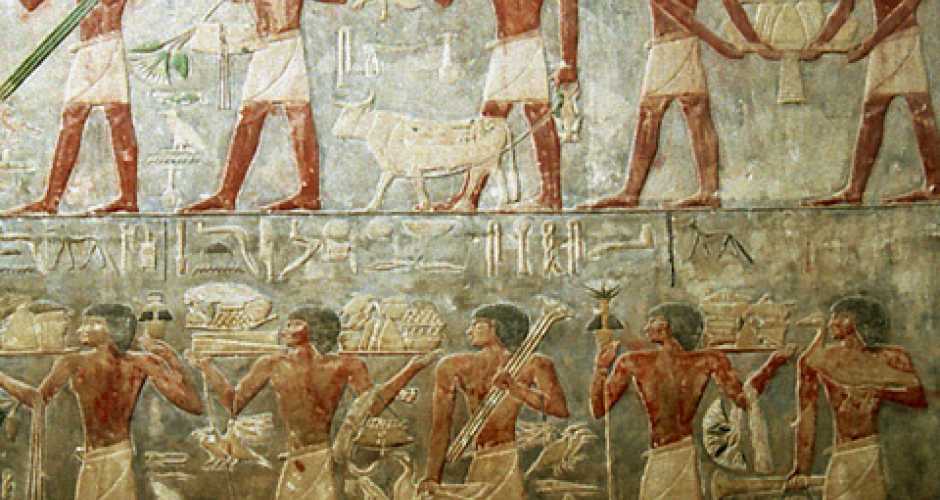 The mastaba employed three types of stonework in its construction : Conspicuous parts, such as the exterior walls and the upper part of all the interior walls (certainly those containing decoration), were constructed mainly with white Turah limestone. The rest, with the exception of the roofing slabs (which were of a poor quality yellow stone), used a courser stone of a purplish colour. The entrance to the mastaba lies towards the east end of the north facing frontage, It is narrow and set back in a recess, the south wall of which has a much slighter slope than that of the facade. At the time of Norman de Garis Davis, it was impossible to determine if this recess had been pillared and roofed as in some mastabas. At the north-west corner of the mastaba, the wall of the next mastaba (D62) shows that a lane of about 1.5 metres (at ground level) exists between the mastabas. This is currently blocked with brickwork.A short narrow entrance leads to a long decorated room which appears to have served only as a corridor, oriented north-south, measuring approximately 7 metres long by 2 metres wide. The detail of the walls were never fully completed, and all stages of production are found, from almost obliterated ink designs to exquisitely finished reliefs. It was decorated for Akhethotep, Ptahhotep appearing and named as his son. Part of the decoration (east wall) contains a parade of 17 women, each acting as a symbol for one of the estates of Akhethotep. Other representations essentially reflect agricultural and pastoral activities. 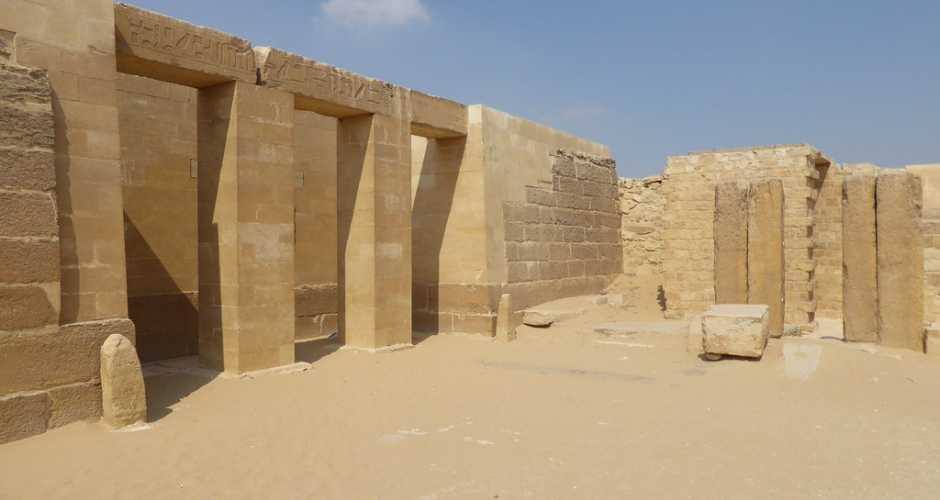 Facing the entrance, the southern end is terminated by a relatively deep niche. Its base is raised about one metre above the floor of the corridor, and it was possibly intended for a seated statue of the deceased.This entry corridor has three exits, one on the eastern side, two on the west. Before the niche, the passage to the east leads to a very damaged annexe and possibly further constructs. The northern-most west exit gives access, by a passage, to two further subsidiary undecorated rooms. The first has its long axis east to west whilst the other is north to south. The passage from the south end of this decorated entry corridor leads to a large, undecorated, four pillared hall.The hall is the main strategic core of the funerary complex, and measures approximately 6.3m across (east to west) and 8.4m in length (north-south). The heavy stone roofing was carried on rough hewn architraves, over 3 metres in length, which crossed the room in three spans by aid of the four pillars. The pillars are oblong in section. The hall was built with white stone, except for the framing of the south and west doorways, but the surface of the walls and pillars remained rough, so that its uninscribed state seems intentional.A doorway at the centre of the north wall of the hall again also leads to the two northern rooms accessed from entrance corridor. 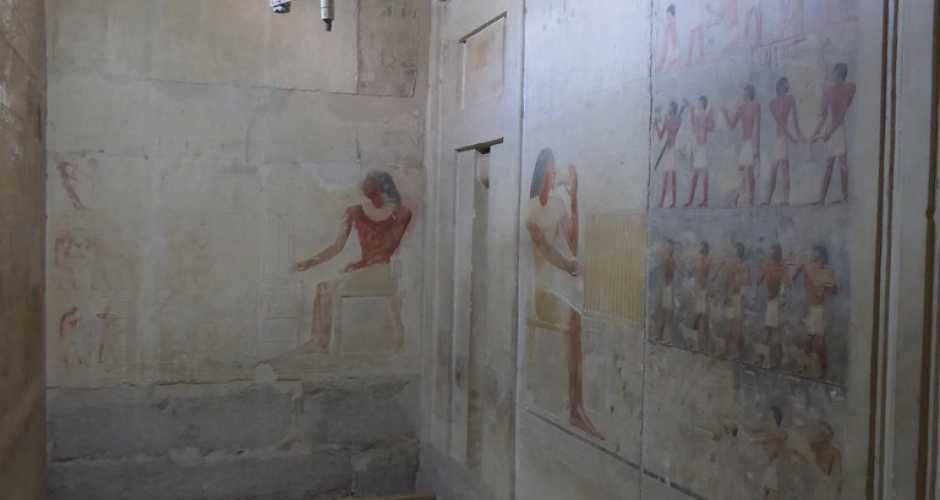