The Pyramids Of Dahshur

Dahshour is one of Memphis's most important cemeteries and is one of many vast necropoleis located in the great Ancient Egypt Capital. Located about 30Km south of the Giza Pyramids, and in the southern wing of Saqqara, the Dahshour area contains pyramids of the IV and the XII Dynasties. Here you will find the Pyramid of Amenemhat II, and the Pyramid of Amenemhat III, or the Black Pyramid. In fact, the great King Snefru (2680-2656 B.C), the founder of the IV Dynasty, was the first king who chose to build his tomb in this royal area, as it was close to the capital, Memphis.

First, Snefru built the southern pyramid, or what we call today the Bent Pyramid. The architect was horrified to find he made a mistake during its construction and  he didn't realize it until the height of the pyramid reached about 48m (with an angle of 54 degrees)! He made a quick decision and altered his design in order to make it safer (and to prevent what had happened at Medium). When he finished, the pyramid's angle was just 43 degrees! Today, it is called the Rhomboid or Bent Pyramid.  Egyptologists, analyzing why he made the change, think that the angle of 54 degrees was going to result in a very wobbly but huge and high pyramid This would have made the pyramid very unstable, especially when cracks started to appear, which they did and were later filled with gypsum.

The Southern (Bent) Pyramid of Dashur was built from local limestone and cased in fine, Turah limestone. Its height is about 101m, with a length of 188.6m on each side. The original entrance of the pyramid is found the northern face as usual, but Professor Ahmed Fakhry (1905–1973), during his 1951 excavations, discovered another unknown entrance on its western side.One of the most remarkable features of the pyramid is the existence of cedar beams, which are thought to have been imported from Lebanon. East of the pyramid is a small Mortuary Temple consisting of one small shrine. To the south is a small subsidiary pyramid, cleared in 1947 by the Egyptologist Abd El-Salam Hussein. 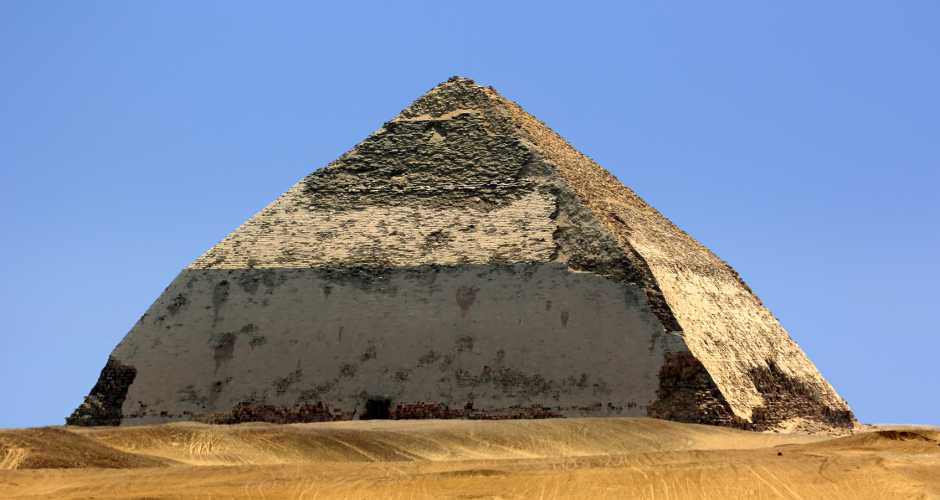 About 2Km to the north of the southern pyramid, another pyramid was built for King Snefru. This time his architect was more careful. He avoided all of his previous mistakes by following the same angle from bottom to top - 43 degrees. This is what helped to create the first, perfect, complete Pyramid in history. This became the “blueprint” for all future Pyramids, which appeared during the IV, V, and VI dynasties. This "perfect pyramid" is known as the Northern Pyramid due to its location but also, Red Pyramid, as the builders had favored a special kind of rosette limestone to build the inner burial chamber. It is 99m high, and each side of the base is 220m in length. 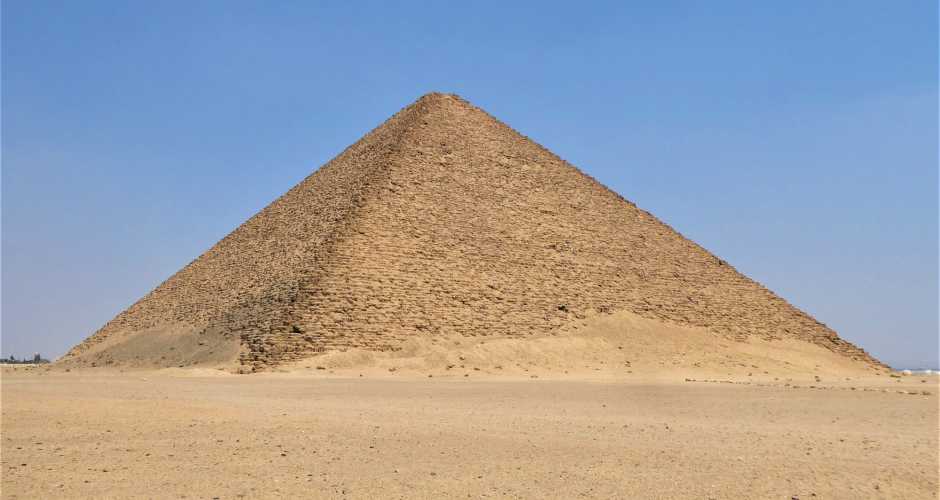 The Black Pyramid of Dashur was the first pyramid built by Amenemhat III (of the Middle Kingdom of Ancient Egypt) during the early part of his reign. Unfortunately the pharaoh failed to heard the warnings of history and so this pyramid is now in a rather poor state. It is known as the Black Pyramid due to the colour of the mudbrick core revealed by the missing casing blocks but was known to the Ancient Egyptians as “Amenemhat is mighty and perfect” – a name which must have seemed increasingly ironic as the structure began to crumble shortly after construction 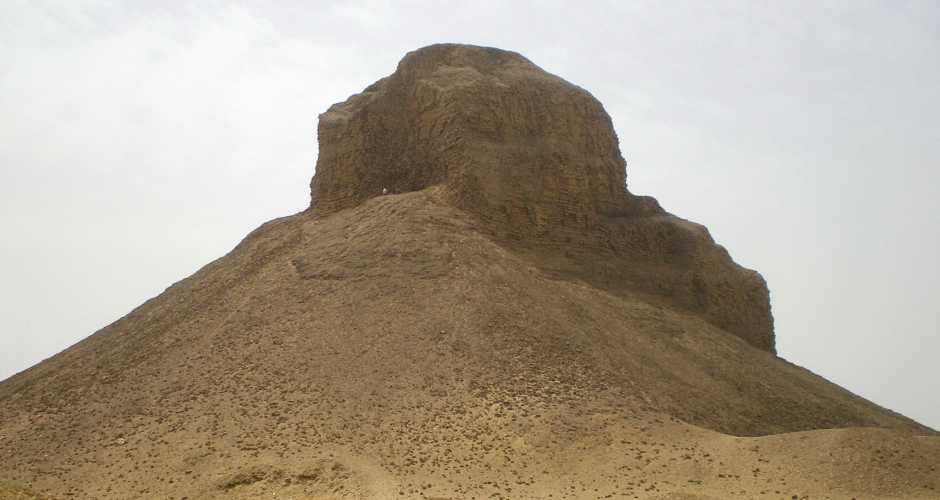 By the time the pyramid was being completed the ceilings had sunk by as much as two inches in places, some rather menacing cracks had started to appear in the masonry and door frames had begun to buckle. The builders reinforced the structure with mudbrick walls and large cedar beams but while this did prevent its immediate collapse Amenemhat chose to build another, more secure, pyramid in which to be buried. This second pyramid was constructed at Hawara rather than Dashur.The base of the pyramid was around seventy-five meters on each side and it would have been around one hundred and five meters when completed. Like other Middle Kingdom pyramids the body of the pyramid was constructed from mudbrick and clay (rather than durable stone) clad in limestone. However, the mudbrick core was built in stepped form perhaps to try, in vain, and give the monument greater stability. Unlike earlier twelfth dynasty pyramids the substructure of the pyramid is a complex network of interconnected passageways and was clearly built as a burial site for the wives of the pharaoh as well as the king himself. It is suggested that the complexity was an attempt to fool tomb robbers but it may also have had a ritual significance as the chambers were sometimes described as the home of Osiris.